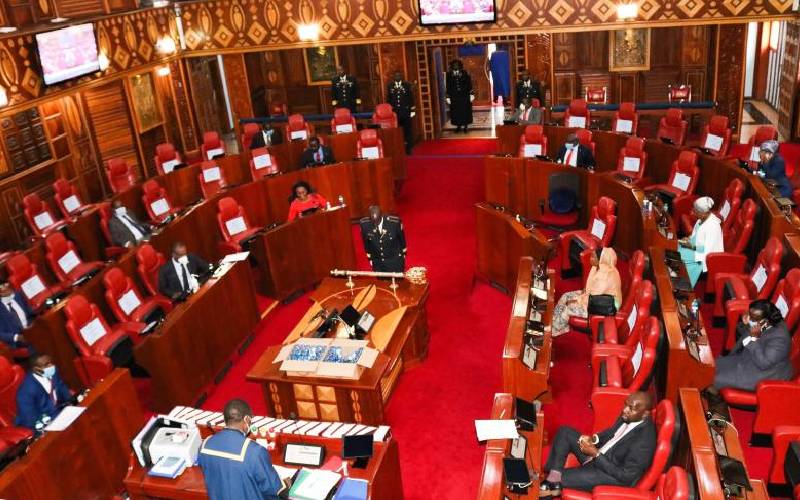 It was a long wait to unlock the county billions stalemate as the State and Senate bared their fangs yesterday.

The police flexed their muscles outside Parliament as senators dug in, demanding a stop to proceedings until their colleagues who had been earlier arrested were released ahead of a crucial vote to determine a revenue-sharing formula.

But by the end of it all, it was clear that the Senate would be heading for a 10th attempt next week to unlock the stalemate.

At some point in yesterday’s charged proceedings, the House suspended debate for 30 minutes to allow senators to try and resolve the division of revenue issue in an amicable manner.

When they returned to the House at 7.40pm, Siaya Senator James Orengo unveiled a list of members who would form a 12-member mediation team to build  consensus before the House convenes for a special sitting, next Tuesday.

“Sakaja and Wetang’ula will be the co-conveners. They meet tomorrow (today) at 2.30pm. They will set their programme and schedule before we convene for a special siting next Tuesday after we have an informal meeting (Kamukunji),“ said Orengo.

“The clerk, Jeremiah Nyegenye, will guide the committee. He should not delegate. The Parliamentary Budget Office will be led by Martin Masinde. The committee can chose to invite CRA (Commission on Revenue Allocation) and other stakeholders to ensure public participation.”

Orengo was optimistic the chosen route would resolve the stalemate.

Samuel Poghisio lauded the decision, saying this was what Speaker Kenneth Lusaka had initiated with a 10-member mediation committee that had representatives from both sides.

“I ask the committee to only call for the special sitting once it finds a solution,” said Poghisio.

Orengo said the team would work closely with the Security Committee on the issue of senators who had been arrested.

“Let them work with the same energy, as the Speaker’s office follows on the arrests,” he said.

Lusaka said: “I thank the senators. I urge you to remain united and even after we go through this. The Secretariat should organise for a retreat to bond. Divided we shall fall, united we shall stand.”

In a rare show of unity, both camps in the protracted row on the third revenue-sharing formula chose to stand with Senators Cleophas Malala (Kakamega), Steve Lelegwe (Samburu) and Christopher Langat (Bomet) who were arrested ahead of the vote. The government side, however, opposed a deferment.

Efforts by members to demand answers from Interior Cabinet Secretary Fred Matiang’i and Inspector General of Police Hillary Mutyambai also hit a snag after their team failed to appear before the security committee.

The irked senators yesterday afternoon rallied behind Kithure Kindiki’s adjournment motion to defer the vote until the three senators were released. The verdict was, however, a tie of ayes at 29 and nays at 29.

“This takes us to Article 22 (2)(a) ‘in the case of a tie the question is lost’. Which means the question to adjourn is lost and therefore we proceed to the next order,” ruled Lusaka.

The Kindiki wing, christened Team Kenya, questioned why the senators were whisked away to their respective counties on frivolous grounds, alleging that the government’s last-minute action was meant to rig the vote.

Efforts by the Kindiki camp to block a motion by Majority Whip Irungu Kang’ata to proceed with the order in the absence of the three senators came to nought after it sailed through, 31 against 28.

“The House is proceeding with the amendments by Senator Petronilla Were. My hands are tied on the issue of delegated voting by the elected senators,” Lusaka said.

Senator Were’s amendment to the motion on the report of the committee on Finance and Budget on the third basis for allocating money among the counties seeks to retain the expired second generation formula until counties get Sh348 billion, as opposed to current Sh316.5 billion.

The Mithika Linturi formula caps the allocation using the old formula at Sh270 billion, while proposing that the balance of Sh46.5 billion be subjected to the new formula. It got the backing of 25 senators against 20, and now needs another vote to amend the committee report.

Senators Orengo, Ledama and Kimani Wamatangi also had amendments which were yet to be moved by the time of going to press yesterday.

The lawmakers, however, cited Matiang’i and Mutyambai for contempt and asked Lusaka to stamp his authority and restore the integrity of the House after they failed to appear before the Security Committee chaired by Garissa Senator Yusuf Haji.

The senators asked the Speaker to impose sanctions against the security officials and enforce the summons after they accused Matiang’i and Mutyambai of failing to honour their invite.

“The committee reports on the directive given by the Speaker. The clerk of the committee sent an email to the CS and PS for Interior Kibicho Karanja, and the other officers who were supposed to accompany them,” Haji told the House.

“They have sent an SMS and one of the officers at the office of the CS did inform us that the CS is on the 10-day leave which was given by the President, therefore he was not available. By extension, the PS, the IG and the Directorate of Criminal Investigation boss George Kinoti cannot come without being accompanied by the minister. Therefore, the committee decided to report accordingly.”