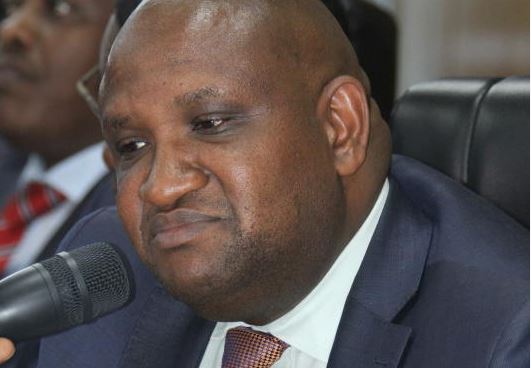 The Kenya Revenue Authority (KRA) Commissioner-General James Githii Mburu (pictured) has had his term in office extended from three to five years.

Officials said the taxman board met and approved the extension of the term for Mburu and all chief managers, deputy commissioners and commissioners to enhance their operations in office.

Treasury Cabinet Secretary Ukur Yatani gazetted the extension of the term from three to five years on August 12.

Officials aware of the developments said the board met and approved the changes before advising Yatani to implement them. The board felt three years is not enough time for the executive at KRA to come up with strategies and implement them.

“The board felt three years are not enough to work effectively. Again, we are doing what regional countries have. Uganda, Tanzania and Rwanda’s heads of revenue have their terms which are similar hence the need to change ours too,” said a source aware of the developments.

The official said the board was harmonizing terms of office of the revenue agency to be in tandem with those of the regional and continent at large.

The board said the officials will retire after five years or 60 years, whichever comes first. According to the board, most executives at the taxman are young and energetic and needed to have more time in office to meet their goals.

Mburu was appointed to the office in July 2019 after a competitive recruitment. He succeeded John Njiraini who had retired.

Mr Mburu was then serving as the taxman's commissioner for Intelligence and Strategic Operations. The former Institute of Certified Public Accountants (ICPAK) boss placed his bet on technology and revamped legal systems to enhance tax compliance.

According to Mburu, the taxman is enhancing automation and use of technology to increase revenue collection and reduce human interaction which provides avenues for corruption.

The enhanced automation will support their efforts in increasing the tax base including taping into the digital economy which has grown as a result of the Covid-19 pandemic, officials aware of the plans said.

In his one year of service as the CG, Mburu has implemented performance management system which has apparently caused a lot of discomfort among some staff.

Over 15 staff members have since been sacked for failing to meet the required revenue.

KRA got an additional Sh10 billion budget allocation with an aim to boost identification and capture of wealthy tax cheats in what promises to be the biggest crackdown yet on high-net-worth individuals and firms.

The authority is expected to collect Sh1.6 trillion this year.

The additional funds will give the KRA more muscle in its fight against tax cheats, allowing it to acquire equipment and hire more staff, especially enforcement and compliance workers

The agency plans to hire 1,000 workers who will be investigating rich people’s sources of income and expenditure against their tax remittances. Some will work on intelligence reports to seek recovery of unpaid taxes with the additional staff being given a target of raising billions of shillings in the new financial year.

By Babere Kerata Chacha 1 hr ago
Premium Give Queen Elizabeth a break; it's unAfrican to attack the dead
.