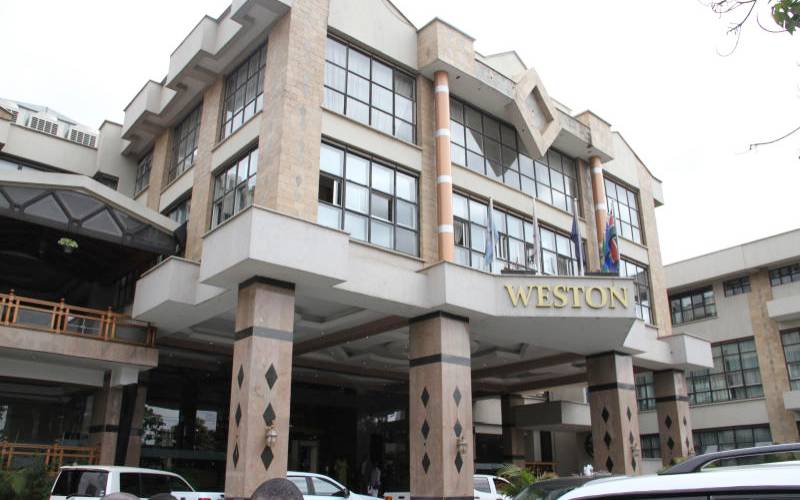 It has been one year and counting since the Kenya Civil Aviation Authority (KCAA) approached the Lands Court and filed an application seeking to repossess the land on which Weston Hotel stands.

This after the National Land Commission (NLC) declared that the hotel was constructed on public land.

While delays are nothing new when it comes to the dispensation of justice, it is often much harder to point a finger at the underlying causes.

In the Weston case, all indicators point to a confluence of political intrigue, tardy compliance with court orders, and filing of fresh applications starting June 24, last year.

The case had been slated for hearing on the 29th of last month after several adjournments that had been prompted by, among other things, the NLC seeking the court’s intervention to delay giving its side of the story because it had no commissioners in place.

When the case finally came up on May 26, the court allowed the commission to file its reply. All parties should have filed their submissions by July 29, which meant the case was ready for hearing and final determination.

But Weston filed a new application in June seeking to strike out the case. This means the court will have to settle the new application, which will either pave way for a full hearing or its termination even before hearing the merits.

With the court now proceeding on vacation, which ends in September, plus the uncertainties of the Covid-19 pandemic, the case may not be resolved this year.

Go for the jugular

The calibre of lawyers hired by parties in the case was a pointer that each wanted to go for the jugular.

Early in the case, Weston had asked the court to kick out lawyers perceived to be allies of ODM leader Raila Odinga.

Weston Ltd argued that senior lawyers James Orengo and Otiende Amollo should not participate in the case owing to their oversight roles in Parliament.

Weston’s lawyer Ahmednasir Abdullahi argued that Orengo, who is also the Senator for Siaya, and Otiende, who is the MP for Rarieda, were both lawmakers and as such are barred by law from prosecuting cases in court.

Both Orengo and Otiende were elected on ODM party tickets. Ahmednasir argued that the case was filed “out of ulterior motives and to attract media mileage”. He told the court that Orengo should not be part of the case as records indicated he was the Senate minority leader.

“I will be filing an application seeking to have the applicant’s lawyers withdraw from the case. The issue to be determined will be whether members of an arm of government can represent parties. He is a leader of the minority and is expressly prohibited by the Constitution,” said Ahmednasir.

Orengo, however, argued that he would defend his position as KCAA’s lawyer, saying similar arguments in the past to have him barred from cases for being a lawmaker had failed.“As to the application my learned friends want to file, many have been filed against me without success,” he responded. Orengo voluntarily withdrew from the case in October but not before the two senior lawyers had clashed on orders issued by the court that stopped any transactions relating to the contested property.

KCAA’s other lawyer, Stephen Ligunya, explained to Lands Court judge Bernard Eboso that after consulting KCAA, Orengo had decided to withdraw his services.

“The position of the client is this is a side show, and it is our client’s decision that senior counsel will not be participating in this matter,” explained Ligunya. In a surprising change of heart, and tune, Ahmednasir said he was ‘saddened’ by Orengo’s exit.

I am disappointed that Orengo has opted out of this matter,” he said.