Family awarded 4.1m for girl's killing by officer 13 years ago 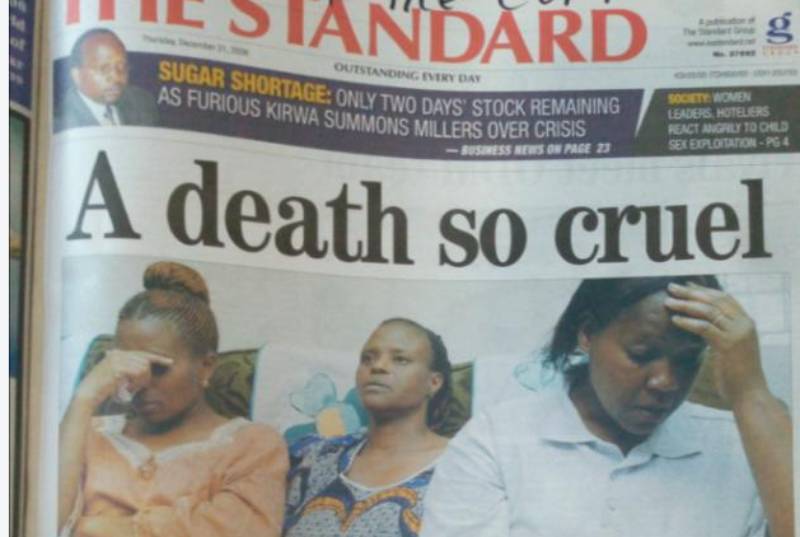 Christine Samba would be celebrating her 32nd birthday this year. Maybe she would have also been a successful career woman.

Samba's copy of the Kenya Certificate of Secondary Education result slip shows she was a top performer, scoring B+ in the 2006 national exams, improving her prospects of having a successful career in life.

However, at 18, her life was abruptly cut short by a trigger-happy officer who had been called by their neighbours to come to her family’s rescue from thugs who had raided their home in Ongata Rongai.

Fate had it that the former Loreto High School student was the one who, on realising there were robbers in their house, sent a short text message from her mobile phone to a neighbour, who in turn called the killer officer.

Two men arrested for forcing their wives to undergo FGM

In a bizarre killing, PC Emmanuel Kipchumba sprayed the girl with bullets as her father Symon Mwashengwa was pleading with him not to shoot as his daughter was being used as a human shield.

But Kipchumba fired nonetheless, hitting Samba on the chest and neck, killing her alongside the thug on the spot. The robber, it emerged, had a toy pistol but the officer fired about six rounds at the two.

It is now almost 14 years after she was killed. Her family had sought justice for her killing and the High Court has ordered the government to pay her parents Sh4.1 million after finding that Kipchumba was reckless.

In what demonstrates how agonising a court process can be, Samba’s family had to wait for close to 13 years to finally find justice. The case, before the Civil Division of the High Court was filed in 2007, and was settled on July 16, 2020.

Justice Lucy Njuguna in her judgement ordered the government to pay the amount, which will factor in pain and suffering, Sh50,000, loss of expectation of life, Sh100,000, loss of dependency, Sh2 million, exemplary damages, Sh1.9 million, and special damages at Sh509,360.

The judge, however, declined to give any award for violation of right to life.

It emerged that he not only shot the girl, but went ahead to shoot and kill one of the two thugs while he was in a position of surrender and pleading for his life.

The trial court ordered that the officer be charged with manslaughter.

“It is clear from the foregoing that the shooting and unfortunate killing of the deceased was unlawful, especially considering this was done in the hands of a police officer. I also note from the inquest proceedings and other evidence that there is no indication of there having been a shootout between the police and the intruders on the material date, as alleged by the defendant (AG),” Justice Njuguna noted.

On the material date at about 5.30am, Mwashengwa was headed to the garage at the family home when he was met by two intruders who forced him back into his bedroom and ordered to lie down. The intruders then woke his wife up and also forced her to lie on the floor.

While one of the intruders watched them, the other searched the remaining rooms in the house and later returned with his niece, son and the daughter, who were also asked to lie down.

The intruders demanded cash, and while one continued to keep watch, the other ransacked the remaining rooms for valuables before returning to the bedroom with the indication that they were ready to leave.

Upon informing the intruders that the keys to the garage were in the living room, they picked Samba to lead them there, but unknown to them, police officers had been alerted of the robbery and a police vehicle was parked at the gate at the time. The officers jumped over the gate and one of them came to his bedroom and sought to know the whereabouts of the intruders.

Mwangeshwa told the officer that one of the thugs was with his daughter in the living room, further alerting them that he had a gun and urged them not to open fire for fear of the girl’s safety.

Notwithstanding his earlier warning, the police officer went to the living room and started to shoot. Samba was shot in the neck and shoulder three times.