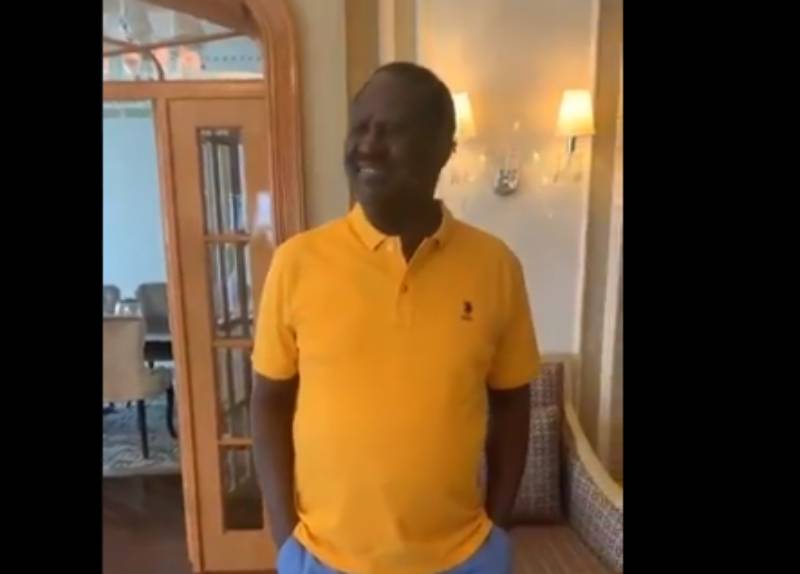 A video of Raila Odinga being interviewed, by what according to a post on Twitter, is his daughter Winnie has surfaced.

The Orange Democratic Leader (ODM) leader is recuperating after treatment in Dubai.

The video shows Raila assuring Kenyans that he was back on his feet after a successful procedure.

“And we're back! Feeling good and fresh, ready for the game! A special message from @ Raila Odinga” reads the post.

In the video, Raila thanks his friends and his supporters for the messages of goodwill while he was being treated in Dubai.

“I want to thank all my friends, supporters and all youth who have sent me messages of goodwill. It has been amazing and wonderful. It makes you recover so fast,” he says.

..And we're back! Feeling good and fresh, ready for the game! A special message from @RailaOdinga pic.twitter.com/PVVkVdKuGV

His family had earlier on told The Standard separately that the former prime minister was out of danger, but would not be coming back so soon.

His wife Ida said the Opposition leader had been successfully treated for a nerve disorder affecting one leg, but needed more time to rest and would stay in the United Arab Emirates (UAE) for some time until he was fit to resume his heavy political duties.

She had said the family was pained by rumours on social media to the effect that the former Prime Minister was suffering from other forms of ailments, terming them utterly outrageous.

News about Raila’s whereabouts was first revealed by Oburu Odinga. He said that his brother had left the country for the UAE. This followed speculation on his whereabouts with the former PM’s communication team denying it.

“Odinga is out of the country for a minor surgical operation on his back. It is not a serious health issue. So, he’s okay,” he said.

Like Oburu, Ida, too, would not confirm or deny reports that the politician had left the country in an air ambulance, or say who accompanied him. Ida talked of him having nerve problems in the foot as contrasted to Oburu’s backache. The two could be medically related.

Angola, DRC, Gabon, and Nigeria – have been hit particularly hard given their high reliance on oil revenues