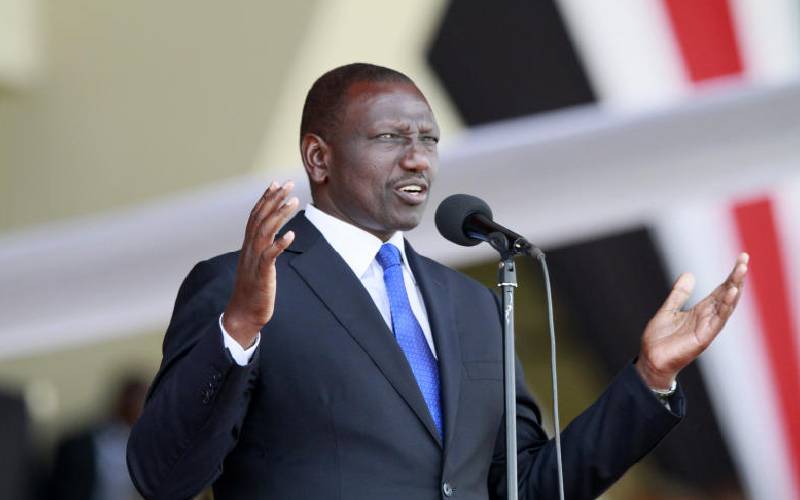 In what many Kenyans on social media described as hustler vs hustlers meeting, the DP invited the two at his Karen home, to encourage them for the good work they do.

Stephen Odhiambo and Dennis Otieno caught the attention of the DP after one of their two in one furniture was shared online attracting praises from netizens.

“I was privileged to meet and interact with Odhiambo and Otieno, two enterprising Kenyans with innovative ideas on garden furniture. I was thrilled by their cutting-edge skills and efforts,” he said.

In what would be an encouragement to other enterprising Kenyans with various skills, Ruto prayed for the two and urged other Kenyans to follow suit.

“I pray to the son of the Carpenter from Nazareth to bless the work of their hands, Karen office, Nairobi County,” he said.

Ruto had ordered for 10 units before ordering for five more for one of his gardens and haggled for the price in a conversion shared on the DP’s official Twitter handle.

“I have a field around here and I need three more units, how much would you charge me for the three? Sh100, 000?” Ruto posed.

I was privileged to meet and interact with Stephen Odhiambo and Dennis Otieno, two enterprising Kenyans with innovative ideas on garden furniture. I was thrilled by their cutting-edge skills and efforts. pic.twitter.com/ZPMXc8Ddwl — William Samoei Ruto, PhD (@WilliamsRuto) June 25, 2020

He pleaded with the two to charge him hustler's price but they stuck their ground, saying despite being a hustler, the DP was better off and that Sh50, 000 was the best the price they could give him.

"Please you have to consider your fellow hustler, you can't charge me that whole money. What would you charge rich people if you want to charge me Sh50,000 for one?" he posed.

Otieno, however, insisted that Sh150,000 for the 10 units was fa fair price for a hustler like Ruto.

“You being a fellow hustler, we will charge you Sh50,000 for each unit, but for ordinary Kenyans, we charge Sh22,00,” Otieno said.

The two said they first started with furniture that could carry only three people before designing a larger one that can carry six people.

“We have designed one for six people, saying during the coronavirus pandemic, it can only accommodate three people taking into consideration the social distance,” one of the carpenters said.

The furniture, a bench that opens into a picnic table and folds back sparks praises online in the last two weeks with Kenyans describing the two as very creative.

Most carpenters across the country have embraced the two carpenters' creativity and are now making the convertible picnic table bench which retails at between Sh15,000 and Sh25,000.

I pray to the son of the Carpenter from Nazareth to bless the work of their hands, Karen office, Nairobi County. pic.twitter.com/Oe3lL1fSdx — William Samoei Ruto, PhD (@WilliamsRuto) June 25, 2020

FIFA announced on Thursday that it had agreed a $1.5 billion (Sh160 billion) relief plan to help deal with...