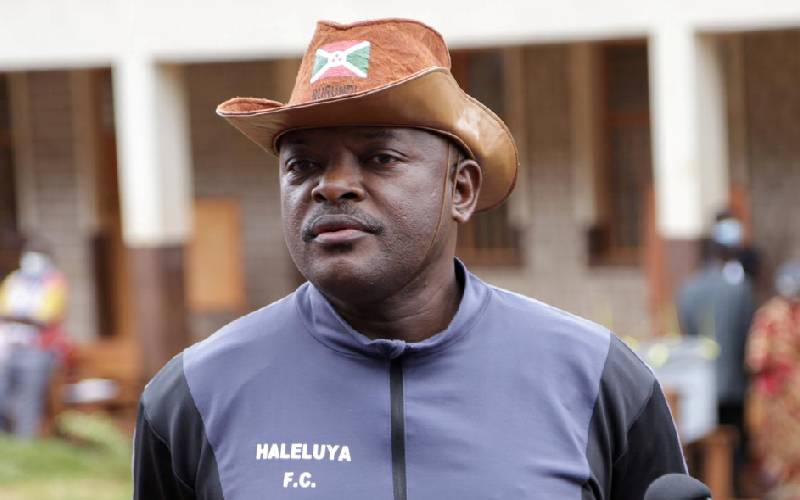 President Uhuru Kenyatta has today directed that the Kenya flag and that of the East African Community be flown half-mast on Saturday, June 13 to honour late Burundi President Pierre Nkurunziza.

According to a Friday statement, the flags will be flown half-mast from dawn to sunset at all public buildings, public grounds and throughout the entire territory of the Republic of Kenya and at all of Kenya’s Diplomatic Missions abroad.

"Flags will be flown at half-mast at all Public Buildings, Public Grounds and throughout the entire territory of the Republic of Kenya and at all of Kenya’s Diplomatic Missions abroad," read the statement.

Nkurunziza reportedly attended a volleyball match on Saturday afternoon and was taken to hospital that evening after falling ill.

Although he appeared to recover on Sunday and spoke to those around him, his condition suddenly deteriorated on Monday morning.

He then suffered a heart attack and despite an immediate resuscitation attempt, doctors were unable to revive him.

Nkurunziza died at a hospital in Karuzi, eastern Burundi.

Burundi government declared a period of national mourning for seven days from Tuesday with flags flying at half-mast.

Denise Nkurunziza, the first lady of Burundi, flew to Nairobi seeking medical treatment for what media reported to be Covid-19.

Uhuru presides over his last KDF pass out parade
President Kenyatta commended KDF for their commitment and service to the country throughout his 10 year-term and even going beyond their core mandate by taking up other roles.
Rift Valley
By Lynn Kolongei
14 hours ago

Uhuru to launch legacy projects in Coast next month
The President will next month launch the Changamwe interchange and Mombasa Kwa Jomvu road built at a cost of Sh85 billion and the Makupa bridge which cost Sh4.5 billion.
Coast
By Kelvin Karani
7 days ago
.