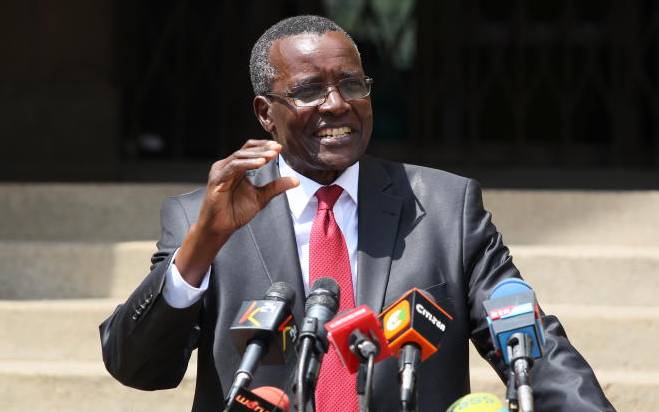 The Judiciary has resolved to scale down court activities for two weeks in compliance with the Government’s directives to fight the spread of Coronavirus.

The decision was made in a National Council for the Administration of Justice meeting on Sunday where stakeholders met to discuss the safety measures amidst the threat of Coronavirus which entered Kenyan borders recently.

“In compliance with the directive issued by the National Emergency and Response Committee, we shall forthwith scale down court activities throughout the country over the next two weeks effective tomorrow, March 16, 2020, in order to allow further consultations and design appropriate measures to prevent the spread of the virus,” notes the statement by the National Council for the Administration of Justice.

Chief Justice Maraga (above) chaired the meeting, where he met government officials from agencies including the Ministry of Interior and the Prisons to discuss the possible outcomes after Kenya announced the first Coronavirus case.

According to CJ Maraga, pursuant to the NCAJ meeting, prisoners and remandees will not be presented in court effective from tomorrow.

However, arrests will be carried out as normal and cases solved at the police stations unless they are more serious to warrant being litigated.

Also affected are appeals, hearings among other activities.

The NCAJ states “With regard to new arrests, all cases except serious ones will be dealt with at the police stations in accordance with guidelines to be issued by the Inspector General of Police.”

“All appeals, hearings, and mentions in Criminal and Civil cases in all courts are suspended with immediate effect. All execution proceedings are also suspended during the two weeks.”

Some of the activities not affected by the decisions include plea taking in serious cases and handling of the certificate of urgency. However, the nature of cases on which accused persons will take plea has however not been revealed.

During this time, the CJ says that judges will continue working and courts will review cases identified by prison authorities to be prosecuted so that the facilities can be congested. Also, Magistrate courts will be reviewing the bail terms.

No trips and training

The Judiciary has also banned trainings and foreign trips and has formed an inter-agency body to help the NCAJ come up with further precautionary decisions.

The statement notes “All conferences, workshops, colloquia, and training programmes are suspended until further notice. There will be no foreign travel for the next 30 days for the staff of the justice sector institutions, whether official or private, save for exceptional circumstances”

“An ad-hoc Inter-Agency Committee has been established to liaise with the National Committee and advise the NCAJ on further precautionary measures on an ongoing basis,” it further adds.

The government on Friday banned social and public gatherings temporarily. Visits to the prisons were also suspended for a month to avert the possible spread of the virus.

The directive also affected the planned Building Bridges Initiative rally which was set for Nakuru on March 21, as well as a series of other political functions.

In the education sector, Cabinet Secretary Prof George Magoha also announced bans on gatherings as well as sporting activities temporarily to prevent the probable spread of the virus.

The decisions came up after a female Kenyan passenger who travelled from the US via London, UK, earlier this month tested positive for COVID-19 at Kenyatta National Hospital (KNH). The patient, who was reported to be 27 years old and in stable medical condition was quarantined at KNH where she is being monitored.

The Ministry of Health yesterday stated that it had traced people who came into contact with the patient.

Yesterday, the government sent a team of fumigators to disinfect her home in Rongai, Nairobi. The team extended the exercise to the bus she boarded after arrival as medical officers combed through to collect all the people she came in contact with.