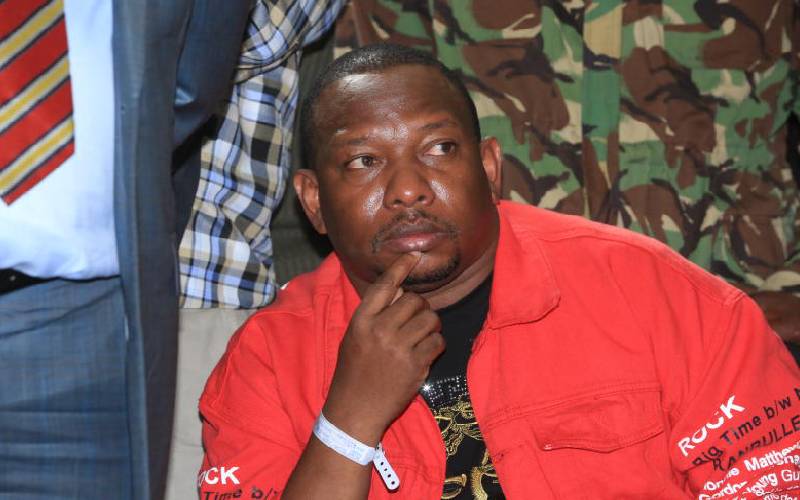 Nairobi Governor Mike Sonko (pictured) has until next Monday morning to submit his defence against an impeachment Motion targeting him.

Speaker Beatrice Elachi yesterday directed that Sonko be served with a notice of the Motion tabled by Makongeni MCA Peter Imwatok last week.

“I direct that the office of the clerk notifies the governor to submit written replies to the allegations raised in the notice of Motion, which should be received on or before Monday March 2, 2020 at 10am,” said Ms Elachi.

Last week, Mr Imwatok listed 16 grounds for the ouster of the city boss.

These included abuse of office and irregular procurement at City Hall.

Sonko was also accused of unprocedurally sacking staff through social media, and without giving them a fair hearing.

He has also been cited for failing to name a deputy governor despite getting an advisory by the Supreme Court.

After the defence is filed, it will be scrutinised by MCAs on Tuesday.

Elachi noted that the mover of the motion had attained the threshold of signatures needed for the impeachment motion to be debated.

She revealed that 55 MCAs had signed in favour of the Motion. This is 14 MCAs more than the required 41.

The Speaker raised concerns that MCAs who had already appended their signatures on the petition had been threatened, with some seeking to withdraw their support for the Motion.

“I, therefore, direct the office of the clerk to invoke provisions of the Standing Orders and ensure that the identity of the members is protected until such a time the matter shall be referred to the Senate in the event the Motion is carried,” ruled Elachi.

The county assembly's Standing Orders restrain members from withdrawing signatures they have appended in support of an impeachment Motion.

The maturity date of the Motion tabled last week is Thursday February, 27.

According to the Standing Orders, the assembly has to debate the impeachment Motion within three sittings after its maturity.

This means MCAs are required to debate the ouster Motion between Tuesday March 2 and Thursday March 4 next week.

During the debate, the mover of the Motion shall be allowed a maximum of two hours to present his case.

Other members wishing to contribute to the Motion will be allocated a maximum 15 minutes each.

Once the debate is concluded, a vote on whether to impeach the governor will be made. If the majority vote in the affirmation, then the matter will be referred to the Senate.

The Senate will further conduct its own investigation into the issue and cast a final vote that will determine if Sonko joins former Kiambu governor Ferdinand Waititu in the political cold.

At the same time, Elachi warned MCAs against accepting bribes from Sonko in order to influence their decisions on the ouster Motion.

Elachi claimed there were MCAs allied to Jubilee and ODM who were making visits to Sonko’s private office in Upper Hill , Nairobi, to 'beg' for money.

“I am informed that members go to Upper Hill every day and lie to the governor in order to eat his money. If they really love him, they should show that by voting for him. In 2020 we will not entertain corruption,” said Elachi.