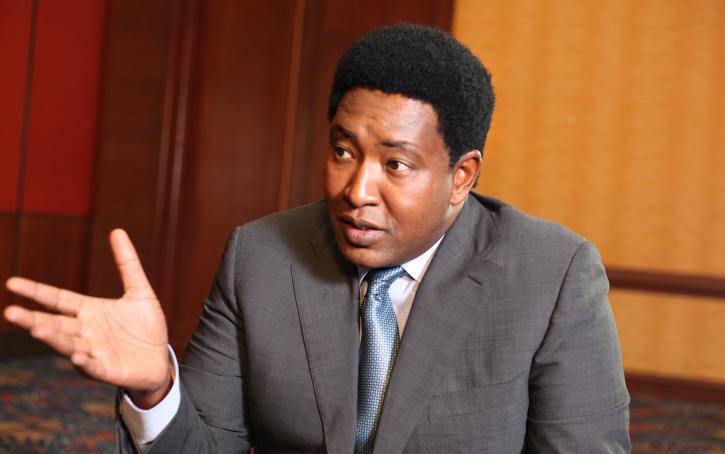 Narok Senator Ledama Olekina has been arrested by the officers of the National Cohesion and Integration Commission over allegations of incitement.

Olekina (pictured) was arrested while leaving the studios of Royal Media Services after an interview Nairobi. He has been taken to Kilimani Police Police Station for questioning over his remarks during the Building Bridges Initiative rally at William Ole Ntimana Stadium in Narok on Saturday.

During the BBI rally over the weekend, the legislator claimed that the members of the Maasai community had been sidelined in positions of leadership and that non-locals had encroached the Maasai-dominated areas leaving them desperate.

His utterances did not augur well with a section of leaders drawn from North Rift and Central Kenya who accused him of incitement. On Sunday, Kericho Governor Paul Chepkwony, and his Nakuru counterpart Lee Kinyanjui called Olekina’s remarks divisive and retrogressive.

Chepkwony said that Maa community was indeed sidelined as Olekina claimed. But he disagreed with the Senator on regulating land utilisation as had been proposed by Olekina saying that land buyers acquired property on the ‘’willing-buyer-willing seller” principle, hence they should not be regulated.

Video footage of his arrest shows the Senator arguing with plainclothes security men who ask him to board their Prado preferring to drive himself to wherever they wanted to take him to.

Later he agrees to board the vehicle but resists being sandwiched between the security men who insist that is the procedure of transporting suspects.

He reluctantly agrees but not before he asks for time to remove his blue jacket which he does and folds neatly.

When a reporter suggests that he looks scared, he retorts "Ero,  lemme tell you: A coward dies a thousand times. A soldier dies once."

Speaking to Spice FM' s morning talk show, Situation Room, Monday, Olekina stood firm by his sentiments saying that nothing would deter him from defending his people.

He accused his critics of being blind to the plight of the Maasai. Olekina pin-pointed Kericho Governor Paul Chepkwony and his area Senator Aaron Cheruiyot whom he accused of hypocrisy.

“Those people who are still in their tribal cocoons keep pointing fingers at me. Why should a governor of Kericho call a press conference and say this guy is a tribal warlord?” he posed.

“The big communities do not want to hear about inclusivity if it touches them. But as long as it doesn’t touch them, they are ok.”

He said that his sentiments were a reflection of the tribulations of his people, which they wanted to table before the BBI steering committee.

“BBI has given us an opportunity to come out and air our problems. If people are not willing to handle the truth when we say ‘this is our problem’ then they don’t live in the 21st century.”

Yesterday, during the funeral service Joseph Kangata, the father of Murang’a Senator Irungu Kangata; ODM leader Raila Odinga appeared to defend Narok Senator when he said that everyone was accorded freedom of expression in the BBI.

Speaking at Mumbi Catholic Church, Raila said that all Kenyans were allowed to air their views without being condemned.

He said: “For those saying Kenyans are insulting each other, let them. Someone once said that I may not agree with what you have to say but I shall defend and protect your right to say it."

This was after Kiharu Member of Parliament Ndindi Nyoro claimed that some leaders were using the BBI rally to divide Kenyans along lines of ethnicity.

“We will not take kindly that a leader can use a public forum to say that some communities should go back to their ancestral regions,” he said.

Coronavirus is becoming a burden to global economy

Like malaria, the coronavirus is turning out to be a burden to the world economy.

By Rose Mukonyo | 8 hours ago