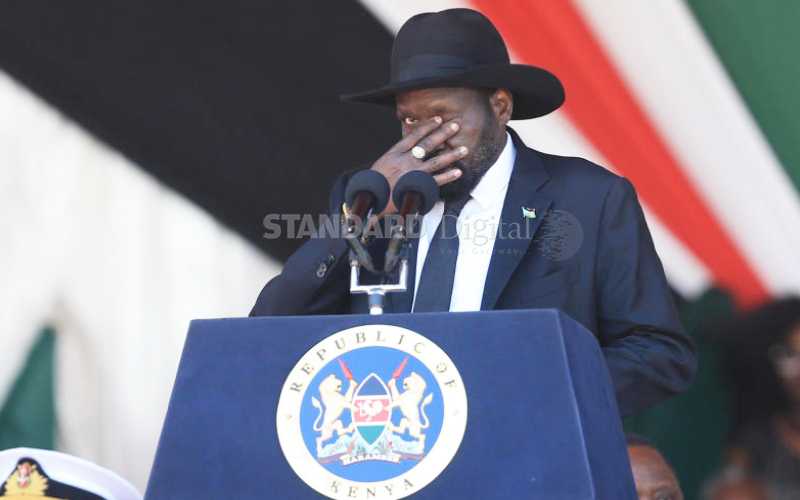 One wet morning in the 1990s, Kenyans woke up to the sad news that two Sudanese pupils at a school along Langata Road in Nairobi had been swept away by floods. Floods were a common occurrence and the country’s disaster response mechanisms were rudimentary. The two deaths would have been dismissed as just another statistic, but a decision by then President Daniel arap Moi to visit the pupils’ families pushed the story to the the front pages of newspapers. Moi’s kind gesture led to more attention being paid to the flood victims. Many years have since passed, and most Kenyans might have forgotten the incident. But people in South Sudan have not. Yesterday, Moi’s thoughtful gesture was remembered by South Sudan President Salva Kiir, who used it to illustrate the former president’s compassion for his people. “Moi heard about the incident and personally went to pay tribute to the two families,” recalled Mr Kiir (pictured). “This showed his love for children and the people of Sudan.” The president went ahead to praise the role that Moi played in South Sudan’s referendum that gave it autonomy from the larger Sudan. Moi, according to Kiir, took the personal initiative to broker a peace deal in the country at a time when everyone had given up on the world’s longest-running conflict. As the sounds of gunfire rent the air and refugees flooded into Kenya, Moi took a leading role in bringing parties to the negotiating table. He rallied the international community to contribute to the peace initiative, Kiir said. He recalled Moi pleading with former Sudan Vice President Osman Taha, who represented President Omar al-Bashir’s government in the peace negotiations, to “let the people of South Sudan have their freedom”. “Moi is our hero. The people of South Sudan are heavily touched by his death,” Kiir said.