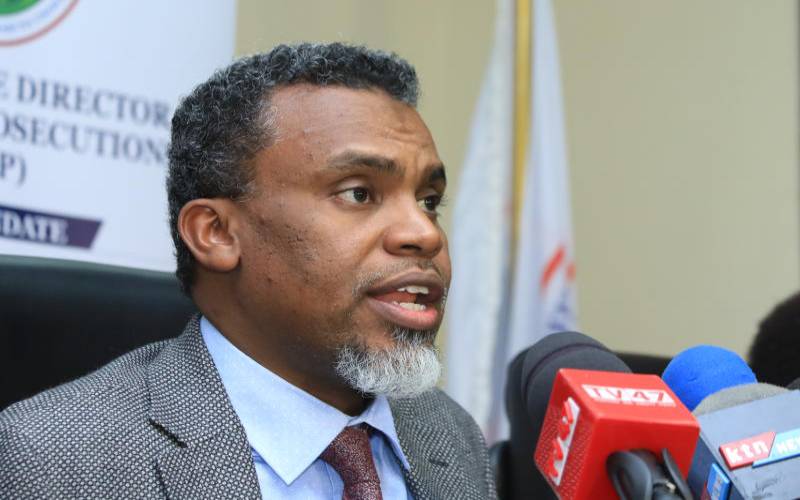 The Director of Public Prosecutions (DPP) Noordin Haji (pictured) has been awarded a leadership integrity award by Action for Transparency Organisation.

Haji was honoured for his efforts in combating graft by initiating economic crime cases amid high voltage competing political interests.

DPP Noordin Haji has received the 2019 Leadership Integrity Award from @a4tkenya for his integrity, exemplary leadership & strategic direction for his office.
He dedicated it to the .@ODPP_KE staff saying it was as a result of team effort that he was awarded pic.twitter.com/g5oBGwFtbr — ODPP_KE (@ODPP_KE) December 10, 2019

The DPP took over the office on Tuesday, April 3, 2018, from the current Environment Cabinet Secretary Keriako Tobiko.

He joined the ODPP from the National Intelligence Service after working at the office of the Attorney General.

Haji, a lawyer, swore to revamp the prosecution process by resizing his net to capture the big fish in the graft sea.

And true to his word, some senior government officials and politicians implicated in multi-billion scandals have faced his wrath and are now out of office,

Despite the prosecutions, none of the big fish has been convicted so far as their cases are pending determination.

He has also been criticised by a section of politicians terming his fight against graft politically-instigated and therefone one-sided.

Haji was not the only one who received an Integrity Award offered by the watchdog group.

In the corridors of justice, Judge Mumbi Ngugi bagged the judicial integrity award owing to her interpretation of chapter six of the 2010 constitution which barred government officials facing criminal charges from accessing office.