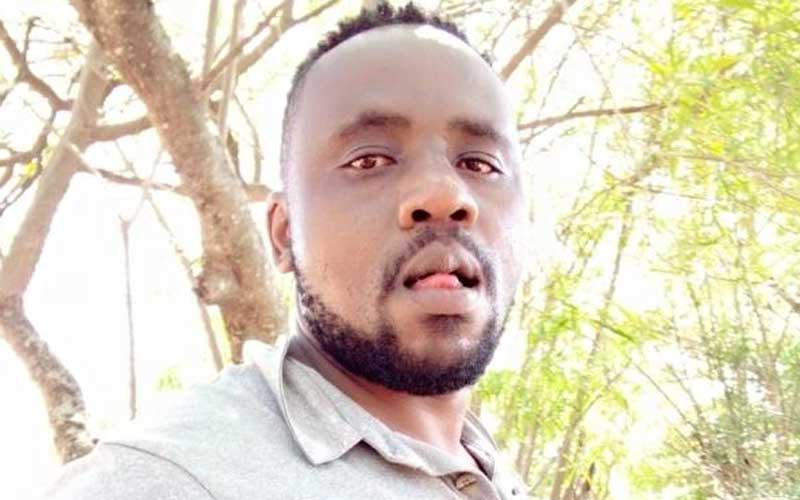 According to his family and close friends, Richard Muema (pictured) has always been a fighter.

Even now, nearly a week after a pistol-toting thug viciously pumped seven bullets into his stomach and leg, Muema defiantly fights for his life at the Intensive Care Unit of the Kenyatta National Hospital.

At 10pm last Tuesday, when Muema left his home in Sunton, Kasarani, he had all intentions of safely reaching a nearby work station, where he works as a freelance writer, eking out a living to support his wife and twins, aged two and a half years.

“He is a freelance writer so he often works at night. He stopped by his friend’s shop to buy airtime as he was heading to work,” Makau told The Standard.

In the CCTV footage of the event, two women are seen communicating as if transacting with the shopkeeper. The shop also appears to offer M-Pesa services in addition to selling goods.

Moments after, one of the women leaves as Muema enters the shop.

As Muema waits for the shopkeeper to serve him, two thugs posing as customers walk in.

One of the men, dressed in a red jumper and a black marvin cap is seen carrying a purple bag and a phone, while the other, wearing a yellow and blue jacket, black trousers and a red cap, has his hands in his jacket pockets.

The other woman leaves and seconds later, the man in a yellow and blue jacket, after nervously fidgeting and glancing outside the shop, brandishes a gun, pointing it at Muema’s head, while appearing to order him to lie down.

He keeps glancing outside while now pointing the gun at the shopkeeper, all while the other man is out of view of the camera.

While the robbers concentrate on the shopkeeper, Muema pounces on the gun holder, hitting him with a brick on the head, prompting the robber to shoot aimlessly and follow Muema outside, as the other thug runs.

Outside, the thug continued shooting at Muema, pumping seven bullets into his stomach and leg, then escaping on foot, according to the police

Seconds after, the footage shows a man going into the shop and leaving almost immediately.

While it is not clear from the video, Muema’s family says the robber with a gun shot the shopkeeper in the neck, prompting Muema, who was laying on the floor as instructed by the thugs, to spring into action.

For Muema’s other brother, Justus Mutuku, it is not surprising that Muema pounced on the gunman after the gunman shot the shopkeeper, who is Muema’s close friend.

Mutuku explained that Muema has always been heroic, stating, “Muema is a people person. He can’t leave you in trouble. He will stay until the last minute”.

The shopkeeper, like Muema, is admitted at Kenyatta National Hospital.

The video of Muema’s shooting has gone viral on social media platforms, with some social media users faulting Muema for retaliating.

Muema’s family, however, thinks that he was right in striking back, since the gunman would most likely have shot him even if he stayed down as instructed.

“If you look keenly you will see that Muema felt he had a chance to fight off the thug, because the thug had focused his attention on the shopkeeper,” Makau adds.

After being shot, his wife says, Muema gave the good Samaritans who rushed to him his friend’s phone number, who then contacted his family.

The good Samaritans rushed Muema to the nearby St Francis Hospital, where he received first aid before being transferred to KNH.

Two arrested with khat at airport

Two arrested with khat at airport