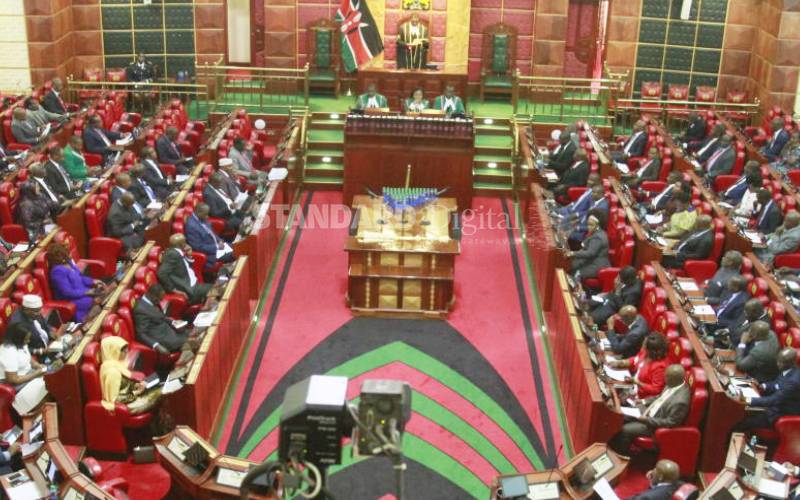 A parliamentary committee is proposing a change in law that will allow a referendum to be held only alongside a General Election.

The Constitutional Implementation Oversight Committee (CIOC) wants referendum questions drafted and answered as voters pick candidates of their choice at the ballot box.

Committee chair Jeremiah Kioni said this would spare the country protracted referendum campaigns during the term of a government.

“This will deal with the hype of political campaigns. It will also save the country costs associated with holding a separate plebiscite vote,” Mr Kioni said.

The Ndaragua MP said the move would not be unique to Kenya, adding that the practice was common in countries such as the US.

The proposal, however, has come under scrutiny over fears it could scuttle ongoing referendum campaigns.

President Uhuru Kenyatta and ODM leader Raila Odinga are set to receive a report from the Building Bridges Initiative at the end of the month, while the Third Way Alliance’s Punguza Mizigo Bill is currently being debated in county assemblies.

Kioni filed a notice of Motion, seeking to have the matter listed in the order paper for discussion by the House tomorrow for possible endorsement. This was approved for consideration by House Speaker Justin Muturi.

But House Business Committee (HBC) member Junet Mohamed has said Kioni’s committee should share their proposals to allow them to reach an informed decision.

The HBC is a powerful 12-member committee chaired by the Speaker and is tasked with setting the agenda to be transacted by members when the National Assembly is in session.

“The notice of Motion will not be properly put before the House if we have no basis for reference. The committees always share reports, which inform the HBC’s decision. What will we base our arguments on,” Mr Junet posed.

He added: “The Motion will be half-baked if we are not properly briefed. This intended Motion has no head or tail.”

Kioni said his committee was mandated by law to provide for stringent special procedures for enacting amendments, including amendments by parliamentary initiative, direct approvals by the electorate in a referendum, or amendments triggered by a popular initiative.

“Our mandate includes overseeing the implementation of the Constitution and considering any impediment to the process of constitutional implementation. That’s why we interacted and continue to do so with various stakeholders and interest groups whose proposals were similar and addressed the articles cited,” he stated.

The chairman explained that there were 15 proposals to amend the law, including the protected articles touching on the governance structure, devolved government, security and the institution of Parliament.

“The issues raised are very weighty. This is a committee-led initiative emanating from its continuous interactions with stakeholders involved in the implementation of the Constitution and other interest groups,” he told The Standard.

According to the committee, the clamour for constitutional change is gaining momentum and proposals presented before it by stakeholders touch on various provisions such as a parliamentary system of governance, doing away with nomination slots in Parliament and the county assemblies, merging constitutional commissions, and reducing the number of sitting members.

The move also targets Article 115 of the Constitution on the powers of the President to veto Bills passed in Parliament, the appointment of ministers from Parliament as well as the appointment by governors of county executive committee members from members of the county assemblies.

The committee further seeks to have the President assign the Attorney General duties as a Cabinet secretary and ensure the principle of separation of powers between the Legislature and the Judiciary is enhanced.

Another proposed change that touches on the First Schedule seeks to have Nairobi City County designated as the Metropolis City of Nairobi.

Kioni said the proposals also sought to introduce a 10-year “sunset clause” after the 2022 polls regarding the contentious issues of Woman Reps’ slots, nominated senators and MCAs.

The “sunset clause” would render the seats obsolete.

“We are seeking to have members debate these matters to help measure the threshold of acceptance,” said Kioni, adding that the country was not prepared for a charged political process.

Majority Whip Ben Washiali concurred with Kioni, saying the move to push the referendum to election time would tone down political rhetoric and allow Kenyans to drive the agenda.

He, however, disclosed that he would suggest to Kioni that the Motion also includes the formation of a select committee to collect views from Kenyans on the proposed changes.