The Government has made a U-turn saying that President Uhuru Kenyatta did not designate a public holiday on August 26.

Earlier communication from PSCU was that August 26 had been designated as a public holiday to allow maximum enumeration of Kenyans during the national population census that begins next Saturday.

“To ensure maximum enumeration during the first two days (August 24 and 25) of the Census period, I have authorized Monday, 26th August 2019 to be a Public Holiday,” the President announced according to the statement published by PSCU on the website president.go.ke.

A tweet was also published to the same effect on the State House Kenya account stating that “Government Designates August 26 As A Public Holiday To Facilitate National Census.” 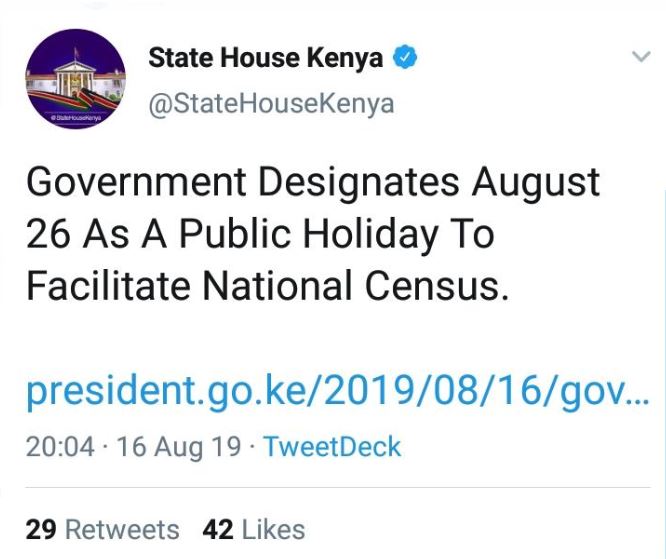 Both the statement and tweet have since been deleted.

Hours later, PSCU sent out a correction stating that the President did not announce that August 26 would be a public holiday.

“CORRECTION. Contrary to our earlier dispatch on the 2019 Kenya Population and Housing Census, we wish to clarify that His Excellency the President did not announce that August 26 will be a public holiday. We regret the error and wish to say that as much as the Kenya 2019 Population and Housing Census is important to the country, August 26 which will be on a Monday will not be a public holiday. Our apologies for inconveniences caused by the erroneous communication,” read a statement from PSCU dated Friday, August 16, 2019.