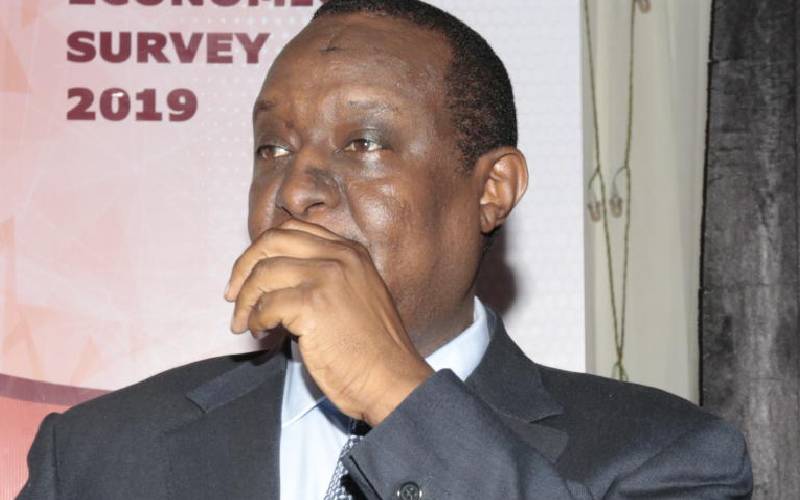 Detectives yesterday moved swiftly to effect arrests of individuals whom the Director of Public Prosecutions (DPP) wants charged over the Arror and Kimwarer dams scandal.

By the time of going to press, National Treasury Cabinet Secretary Henry Rotich (pictured) was still being held at Muthaiga Police Station. Several other members of the Kerio Valley Development Authority (KVDA) tendering committee had been arrested and taken to the Eldoret Police Station. Ten suspects had already been arrested by last evening.

Earlier, DPP Noordin Haji had at a press briefing said his office had a water-tight case against the individuals linked to the dams saga.

In Nairobi, Rotich was driven in a Subaru car to the at about 10.30 am. His Principal Secretary Kamau Thugge was also picked from his residence in Nairobi.

They are among a group of 28 people linked to the scandal who are set to be charged in court.

The DCI officers had camped at the KVDA headquarters, a stone’s throw away from the police station before pouncing on them as soon as Mr Haji issued the arrest directive.

The marching of the individuals on the streets of  Eldoret to the police station created a huge scene as curious onlookers followed them.

Others named in the list were not present at the office by the time of arrest and by the time of going to press sources privy to the happenings indicated they would surrender to police.

The arrest means that technically the operations at the regional body would be plunged into disarray as those named in the scandal are senior management staff.

The tenure of  Kimosop was terminated last month by the board and appointed Mr Kipkech to act until a substantive person was appointed. Kimosop has, however, challenged his ouster in court and the matter is yet to be determined.

At the same time, a resident of West Pokot has moved to court to stop the Authority’s board from transacting any business, terming their appointment illegal. The matter is still pending in court.

Kimosop had been at the helm of KVDA since 2012 and had been awarded a third term last year.

In May, the board chaired by former Keiyo South MP Jackson Kiptanui announced Kimosop’s sacking.

In March, the Italian contractors, CMC JV which was awarded tender to build the multi-purpose Arror and Kimwarer dams announced they were ready to commence construction work.

According to Arror multi-purpose project manager Mauro Abbafati, the actual designs for the two Sh63 billion projects were complete after a comprehensive survey on the project site.

“This are the activities we have been doing and are critical for coming up with designs since we have limited access to the project site.It is a delusion to state we have done nothing,” said Abbafati during a press briefing on the project report then.

The two dams are Vision 2030 flagship projects that will contribute to the achievement of the Government’s Big Four Agenda on food security.

It will also generate of 80 MW of hydropower as an enabler to manufacturing, affordable housing and universal health care; provision of clean water for 80,000 households and livestock; and support to the Arror and Kimwarer rivers catchment conservation initiatives.

All those arrested are expected to take plea today on at least eight offences.

BBI team yet to collect views in five counties

BBI, has been gathering views on the nine issues identified as problems ailing Kenya.