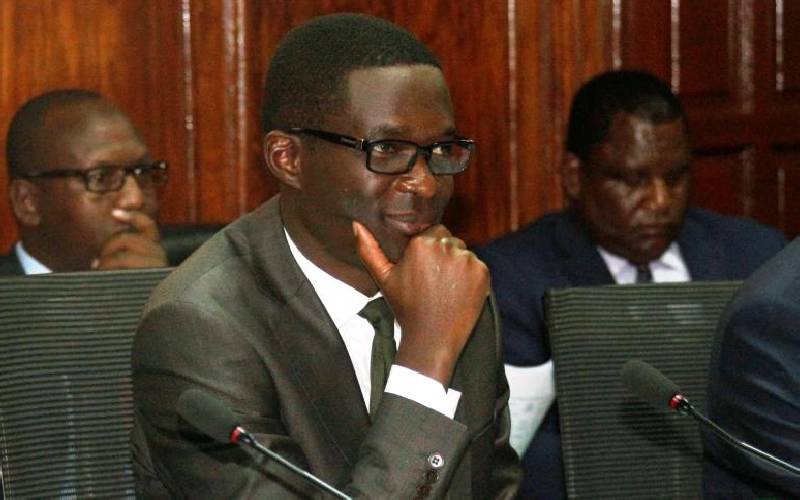 The Employment and Labour Relations Court in Nairobi has for the second time halted efforts to recruit a person to replace former Chief Executive Officer Ezra Chiloba (pictured).

Barely two months after the court took back the Independent Electoral and Boundaries Commission to the drawing board for failing to adhere to the law in its recruitment, it has again ordered that interviews of 10 shortlisted candidates should not proceed.

Justice Byrum Ongaya in a case filed by a lawyer’s lobby, Chama Cha Mawakili, ordered the commission to halt recruitment process until the case is determined.

The Labour Court forced the IEBC to re-advertise the same position after finding it had breached its own rules by requiring all applicants to get clearance from among other agencies, the National Intelligence Services (NIS).

Justice Hellen Wasilwa in her decision observed that the IEBC’s advertisement calling for applications contained more requirements than what is provided in its employment law.

“On the face of it, it appears that the advertisement need to be subjected to the test by this court before the process continues," the judge ruled.

The petition was filed by a man named Henry Mutundu, who says the requirements set by the IEBC are unfair and against the law.

He said the IEBC wanted a person who has had 15 years' experience, against the set threshold of five years.

Mutundu said another requirement for applicants to seek clearance from security agencies amounted to incriminating applicants before they are tried before a court of law.

He adds that the information held by Directorate of Criminal Investigations (DCI) and NIS cannot be used to determine whether one is clean or unclean for the top job.

“Security clearance by the DCI is unconstitutional and not supported by any law  and there is no legal certificate that is granted to the affected persons,” he argued.

The IEBC went ahead to look for Chiloba’s replacement after a dramatic sack which revolved around court cases. Chiloba had first sued the IEBC after his suspension last year over the 2017 election.

However, the response of IEBC Chairman Wafula Chebukati was to blame Chiloba for massive flaws that occurred during the election.

The commission blamed the CEO over key election materials procurement.

“The commission realised there was a need to expand the audit into the procurement of 2017 election materials and a majority of commissioners resolved to send him home. He is lying when he says we lacked quorum to suspend him,” said Chebukati.

On October 13, 2018, he was fired for allegedly snubbing disciplinary proceedings twice.

Chiloba objected to appearing before the committee, insisting on being given access to defence documentation left in his office following his suspension.

By Saul Owiti and Shaun Mutua | 14 hours ago

By Mate Tongola | 18 hours ago