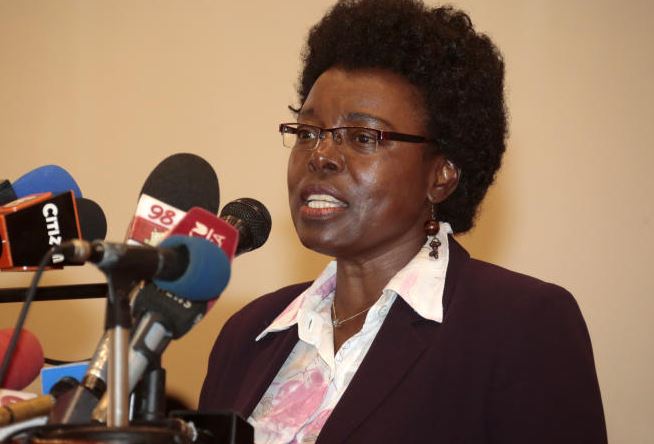 Counties have failed to raise enough revenue and are still heavily reliant on government funds, a report by the Controller of Budget (CoG) has revealed.

According to the report that covers the 2019-20 financial year, only five out of the 47 counties met and exceeded their annual revenue targets, according to Dr Margaret Nyakang’o, the Controller of Budget (pictured).

The best-performing counties in terms of revenue collection are Homa Bay, Taita Taveta, Machakos, Lamu and Bomet. The counties exceeded their annual targets according to the report prepared by Margaret Nyakang’ow, the Controller of Budget.

Homa Bay generated Sh118.5 million from own revenue sources compared to the Sh101.9 million collected in the Financial Year 2018-2019.

Although Machakos exceeded its target by 18.5 per cent in the year under review, it registered a decrease of 11.6 per cent when compared to the Sh1.6 billion it raised in 2018-19. In 2019-20, Governor Alfred Mutua’s administration generated a total of Sh1.4 billion.

During the year under review, Lamu generated Sh109 million, an increase of 34 per cent compared to the Sh71.8 million realised in the 2018-19 financial year.

In total, county governments generated Sh35.7 billion, which represents 65.2 per cent of their set annual target of Sh54.9 billion. A big decrease compared to the Sh40.30 billion the devolved units generated in 2018-19.

Most of the counties have attributed the sharp decline in revenue collection to Covid-19 pandemic, which they say messed up their key revenue sources like trade licensing and parking fees.

The report has also revealed that counties are struggling to absorb money allocated for development. All the 47 counties recorded a two per cent decline in absorption of funds during the year under review.

Sh171.83 billion was spent on personnel emoluments. “Counties must put in place measures that will enable them contain personal emoluments at sustainable levels,” Nyakang’o noted.

Businesses have six more months to smoke out owners