Bosses reveal the biggest mistakes people make on their CV 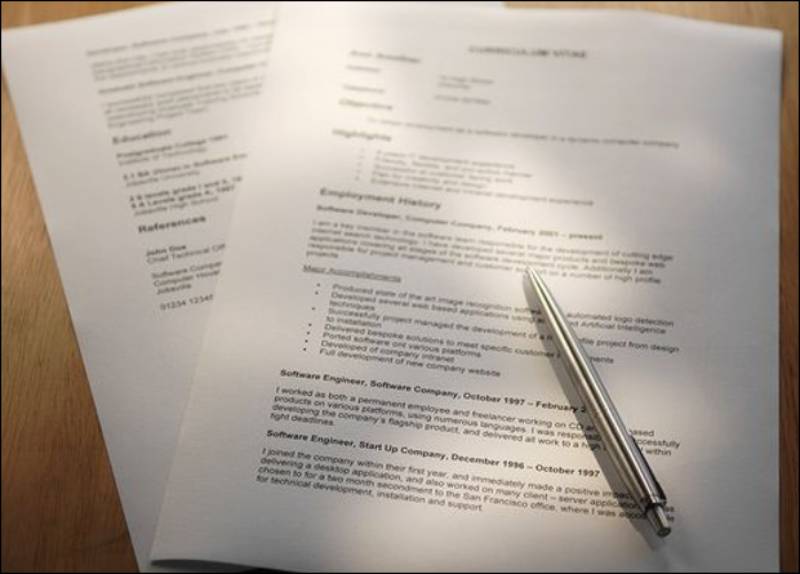 Bosses have revealed the biggest CV faux pas - rambling on for more than two pages, including a selfie and mentioning unusual hobbies.

A survey of 1,000 UK people who oversee hiring at their company found it takes them just 34 seconds to decide if someone's CV is worth a closer look.

Other no-nos include using cliches like 'I always go the extra mile' and having inexplicable gaps in your career history.

More than a third of those polled said that telling an obvious fib on a CV will see it binned, while just over one in 20 don't like it when social media handles are included.

Shelley Preston, head of Adecco Retail which commissioned the research, said: "Your CV is your door opener and it has to be accurate.

"Recruiters will see dozens - if not hundreds - of applications and while it's important your CV stands out, you want it to be for the right reasons.

"The first step is making sure everything is spelt perfectly, because errors like that show you're likely to have similar low standards in your career."

The study also found just under a tenth of those who hire staff hate layouts which are too complicated to actually read, while one in five would be turned off by a rude or inappropriate email address.

And a fifth have even been amazed after an applicant got their company's name wrong when applying for the job.

However, just under six in 10 have made an initial negative judgement on a CV, only for the candidate to turn out to be better than expected.

On the other hand, three quarters have had an applicant turn in a brilliant resume, only to be hopeless once they'd landed the job, according to the OnePoll research.

Half of those polled admitted that a candidate who had a perfectly written CV but didn't seem like a perfect fit for a job would most likely be invited for an interview anyway.

But four in 10 say a single typo on an otherwise perfect application would hold them back from offering that person an interview.

And on average, for every 10 CVs the average employer looks at, four of them will contain a typo or spelling mistake.

The problem could be generational though, as 53 per cent agree that young people today are more likely to have a 'terrible' CV, compared to a decade ago.

Around half even admitted to having a CV come their way with an error on it so hilarious, they were moved to print it out and show it to their colleagues.

It also emerged one in 10 experts in perusing job applications describe themselves as 'extremely good' at spotting a lie on a CV, and 55 per cent have called someone out on a fib.

As many as four in 10 of these truth-benders admitted to the falsehood, while 55 per cent attempted to blag their way out of the situation.

As the UK heads into the busiest job-hunting period of the year, Adecco Retail have created an interactive guide to crafting the perfect CV.

The visual highlighting the dos and don'ts of resume writing and has been designed to help guide job seekers in January as they look for a fresh start.

Adecco Retail's Shelley Preston added: "Your CV needs to be a true and accurate reflection of yourself and your work experience.

"It really does make the difference between securing your dream role and not, so it's integral that it only contains relevant detail, is kept concise and includes no grammatical errors.

"Many jobs are in high demand, so you need to ensure you stand out from the crowd right at the start of the hiring process, and a well formatted CV is the way to do it".

3. Including a selfie as a picture

4. Having a rude or inappropriate email address

8. Including a picture generally

9. Never holding a single job for more than three months

11. Getting a company's name wrong

13. Going across more than two pages of A4

14. CVs which aren't CVs, such as a website or blog instead of a printed CV

15. Layouts which are hard to understand/read

16. Having hobbies which don't constitute as hobbies, such as 'hanging out with friends'

18. Not having any references included

19. Using big fonts or strange layouts to make the CV look longer than it is

20. Including part-time jobs which are no longer relevant

Avoid the pitfalls of marketing your business online

Now that you have opened your business’ social media accounts, what are the things you should be aware of?

By Mwangi Maina | 1 day ago

Lillian Gogo: My dream was to join university
;
Feedback