President Xi in Mao’s footsteps to commit atrocities in Tibet 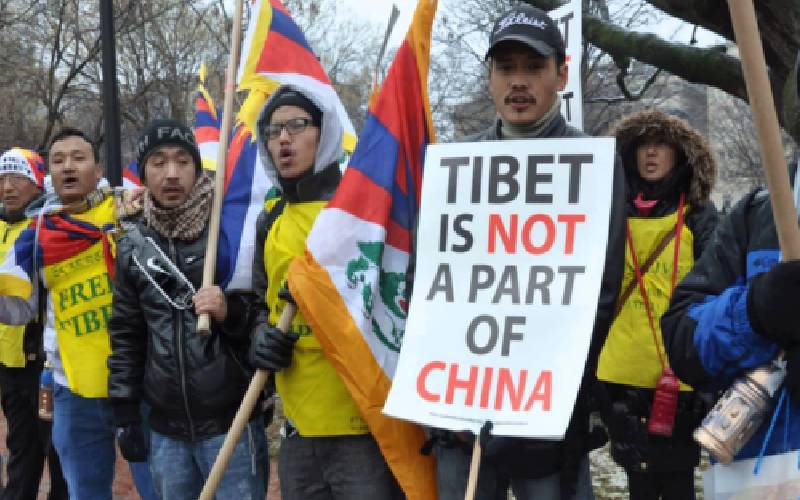 News emerging from Tibet over the past few years leave no doubt that former Communist Party of China founder Mao Zedong’s days are back in this sensitive and most precious colony of President Xi Jinping.

Keen China watchers fear that Xi might establish himself as the new Avtar of Mao.

During the stormy decade of the ‘Cultural Revolution’ (1966-1976) common Tibetans were forced to go through blood-chilling torture of ‘Thamzing’ (public trial in a kangaroo court of Red-Guards) for ‘unpatriotic’ acts such as holding a rosary underneath one’s ‘Chuba’ (Tibetan gown) or for a serious ‘feudal’ crime like making traditional Tibetan salt-butter tea in a bamboo mixer.

Tibetans are arrested and sent to jail even for burning incense or keeping a photo of the Dalai Lama in their houses. The legs of adolescent Tibetan boys are broken for exchanging personal and innocent chats on WeChat without registering the chat group with the local communist authorities. In order to impose Xi’s brand of ‘Buddhism with socialist flavour,’ individual Tibetans are today assigned and awarded by communist authorities for spying on each other.

Foreign friends reflect on CPC's success over the past century

On March 11 this year, the Chinese Public Security Bureau (PSB), Hitler’s Gestapo like the police of China, arrested four Tibetan youths of Atod town in the Dzato County of Qinghai province for offering traditional incense atop a local hill.

For Tibetan people, walking up a local hilltop in the morning to burn herbal incense and tying colourful prayer flags on long strings between two hilltops or tall trees on special days is a common and century’s old practice. It is done to propitiate deities for personal good luck and the community’s wellbeing. According to details reaching Dharamshala in India, the PSB agents raided the houses of four local youths who were reported to have participated in the incense ritual. After a long interrogation, they arrested and sent one of them to jail while three others were placed under close political monitoring.

Only a few days before this incident, the PSB agents had arrested and brutally tortured three Tibetan teenagers for participating in an unregistered WeChat group on their mobile phones. While two of these boys were imprisoned, the third was beaten so severely that the bones of both of his legs were broken and he was maimed for life.

Human Rights Watch (HRW), an international action group and watchdog of human rights, took up the case of a 19-year-old Tibetan monk Tenzin Nyima of DzaWonpo monastery in Sichuan who reportedly died following Chinese police torture in prison in January last year. According to HRW, Nyima was arrested along with six other Tibetan youths for participating in a public demonstration against the forcible settlement of Tibetan nomads. According to HRW, Nyima was quietly released from police custody after his physical condition became too precarious because of severe beating and torture. Nyima died despite his family’s efforts and spending an immense sum of money for his treatment. HRW termed Nyima’s death as “arbitrary detention turned into a death sentence.”

When public anger against the killing of Nyima flooded the local Tibetan social media, the commandos of the People’s Armed Police (PAP) of China swooped on DzaWonpo town and ransacked many Tibetan houses. The commandos confiscated people’s mobile phones to identify individuals who had taken part in WeChat groups without registration and approval of local police authorities.

In the last week of April this year, the Tibetan Centre for Human Rights and Democracy (TCHRD), based at Dharamshala in Northern India, released its annual report on the human rights situation in Chinese occupied Tibet for the year 2020. Accusing China of committing ‘crimes against humanity inside Tibet’, the report says that Beijing rulers of Tibet “continued to carry out extrajudicial killings, torture and arbitrary detention systematically.”

The TCHRD has recorded details of Chinese policies that lead to arbitrary arrests of Tibetan community leaders, environmentalists, writers and common people in this report.

TCHRD says that since Xi’s accession to power in 2012, “attacks and oppression against the civil rights lawyers, human rights activists and dissidents all over China have amplified further.” Things have become worse in China’s colonies like Tibet, East Turkistan (Xinjiang) and South Mongolia where Beijing has been practising brutal colonial games over the past seven decades. In Xi’s era the police terror, religious oppression and digital surveillance have attained far more serious dimensions in these colonies than in Mao’s era.

There have been many credible reports which show that digital surveillance has taken unprecedented dimensions during the Xi era inside Tibet. Millions of close circuit cameras in streets, markets, monasteries, other public places and even inside housing complexes keep a 24x7 watch on individuals and communities across Tibet.

Introducing the Smart-Card and the rule for every Tibetan to carry it has made this surveillance system even more invasive. While Chinese security agents keep a close watch on each individual’s movements through the closed-circuit cameras, the use of artificial intelligence makes it easy for the authorities to record and study any individuals’ moving patterns.

Online analysis of any individual’s movements and meetings with others leaves no scope for any individual to interact freely with others or to plan and undertake a public protest or action. That explains why over 150 Tibetans, mostly youths, have committed self-immolation in protest against Chinese colonial rule in recent years because individual action like this cannot be predicted or preempted by Chinese PSB agents in advance.

Referring to various international estimates, the TCHRD report claims that Xi Jinping’s government spent over 1.39 trillion Yuan last year on police and surveillance activities in the name of its ‘stability maintenance polity.’ “This expenditure is 16.8 per cent higher than the Chinese overall military expenditure”, says the report.

Money spent by the private industry and organisations under the obligation of various laws on similar activities is over and above this government spending. “This maddening obsession of Chinese government with internal security only exposes how insecure the Xi’s government and his communist rulers of Tibet and China feel today,” says LobsangWangyal, a leading Tibetan journalist and Chief Editor of popular news website TibetSun in Dharamshala.

The TCHRD report points out that a new law under the garb of ‘Ethnic Unity’ and ‘maintaining stability has been implemented by the Xi government which takes away even those basic concessions and freedoms from peoples like the Tibetans, Uyghurs, Mongolians and other minorities which have been guaranteed under China’s ‘National Regional Autonomy Law’ as authored by late Chairman Mao. Going by the ground reality of today’s China, a systematic policy of ethnic cleansing is going on in China for over seven decades with the purpose of overwhelming and making these national minorities meaningless even in their own homelands.

Policies like settlement of millions of Han Chinese from the mainland into Tibet, Xinjiang and South Mongolia; encouraging inter-ethnic marriages between the Han settlers and the locals through persuasion and coercion; and sending away large batches of half-skilled youths from these minority areas to distant Chinese industrial town in the name of giving employment, have already started showing results. According to China’s official census figures the total share of Han Chinese population among all 56 nationalities of PRC today stands at above 82 per cent. Over the decades the total strength of the remaining ’55-Sisters’ has been reduced to less than 8 per cent of the total Chinese population.

By Harrison Mwirigi Ikunda | 15 days ago

By Mundia Mundia | 17 days ago