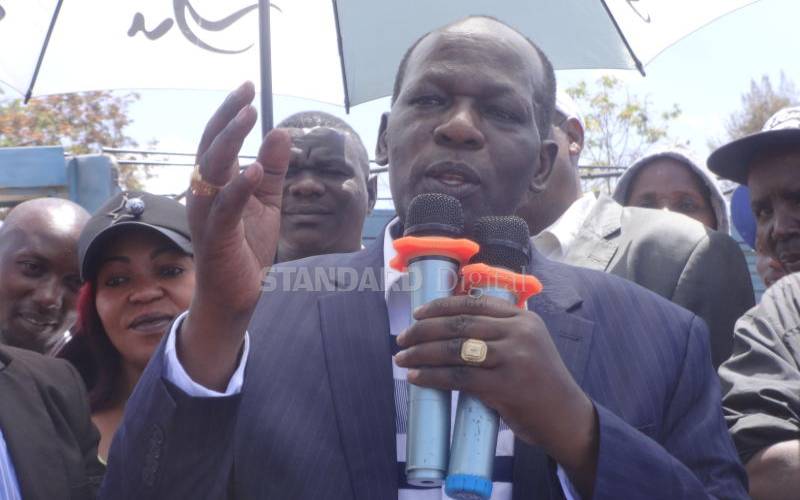 The battle for Juja parliamentary seat is slowly taking shape with allies of the late Member of Parliament Francis Waititu (pictured) and his kin, including widow Susan joining the race to succeed him.

So far, over 10 aspirants have expressed interest to capture the seat most of whom are close family members of the MP.

Waititu’s widow, Susan Waititu, and her two stepsons are likely to seek the Jubilee party ticket in the by-election. The widow has been very vocal and active in the constituency since the passing of her husband.

Her son Martin Munyua and stepson Michael Munyua have also expressed interest in seeking a nomination from Jubilee.

Former Juja Constituency CDF Manager Kennedy Gachuma Ndung’u is also in the growing list of aspirants who have expressed interest in succeeding the MP.

Ndung’u who was the CDF chairman between 2013 and 2016 seeks to use his track record to woo Juja voters to elect him.

The MP succumbed to cancer which he has been battling since 2017.

Those interested in filling his shoes continued to lobby yesterday with Ndung’u holding closed-door meetings with residents and leaders.

Ndung’u yesterday claimed during his tenure as CDF chairman, Juja was ranked seventh in the country and best in Kiambu and in the Mt Kenya region in the funds management.

He cited fair distribution of bursaries to needy students and establishment of new secondary schools in the constituency among some of his achievements.

“As the NG-CDF chair, I ensured the MP’s office paid school fees for all the needy students and rarely did we receive any complaints about how we dished out the funds,” he said.

George Koimburi, who came second after the late MP during the 2017 elections has also expressed interest in vying for the seat.

TSC sets pace for fresh round of mass transfers

According to the program, the county government will pay Sh6,000 annually for each of the 90,000 households enrolled.

By Faith Kutere | 3 hours ago

By Patrick Kibet | 3 hours ago