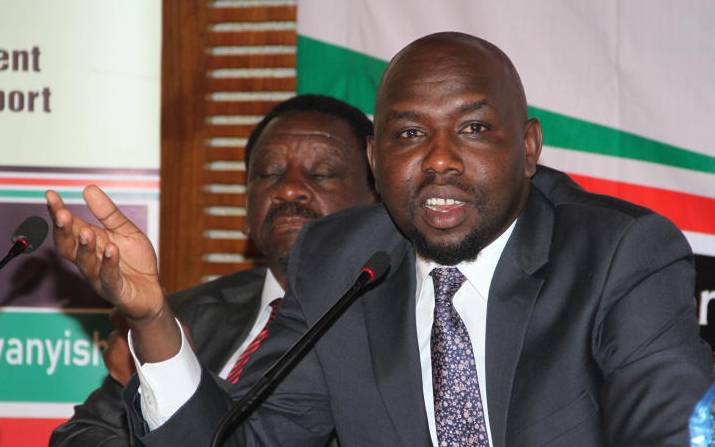 Senators have tabled their proposals before the Building Bridges Initiative task force team at the Laico Hotel, Nairobi.

A team from the Senate led by Majority Leader Kipchumba Murkomen (pictured) and Minority Leader James Orengo trooped to Laico Hotel to present a number of proposals from the House.

The Senate listed various proposals regarding the mandates of the Senate in the passing of the National Budget, fighting corruption at the counties and issues of governance among others.

“We have thought that they (County Assemblies) need to do the primary oversight and we do the overarching oversight just like other jurisdictions in the world including America. The Senate should have Senate Audit Office,” he said.

According to Kilonzo Jr, Senators felt weak and shallowly involved in the fight against graft at the counties. He said that devolution roles had limited the functions of the Senate and interfered with checks and balances.

He said: “We hate the responsibility of being undertakers of devolution. It makes us feel weak, we don’t want to feel weak. We want the minute someone says there is a project that has been mismanaged we move and deal with it immediately.”

“Right now counties and the assemblies are in bed absolutely. Nobody wants to wake up.”

The Senate has also proposed that the budget should be presented to both houses for debate and budget allocation to counties increased from a minimum of 15 per cent to 40 per cent of the National Budget.

“Budget should be presented by Executive to both houses for consideration like in US, Germany, Philippines, and Nigeria… Budget allocation to counties be calculated based on the most recent audited accounts of revenue received,” said Murkomen.

The hearings end today (March 10) after which the BBI task-force team, led by Garissa Senator Yusuf Haji, will present them to President Uhuru Kenyatta. Proposals may culminate in a referendum for a constitutional amendment.

Haji-led task force team will be attending town hall meetings to note down the regional issues for the two final rallies set for Nakuru and Nairobi.

Previous article
How a tech firm reopened its factory

By Julius Chepkwony and Mike Ekutan