House of greed? How legislators use sittings to extort Kenyans 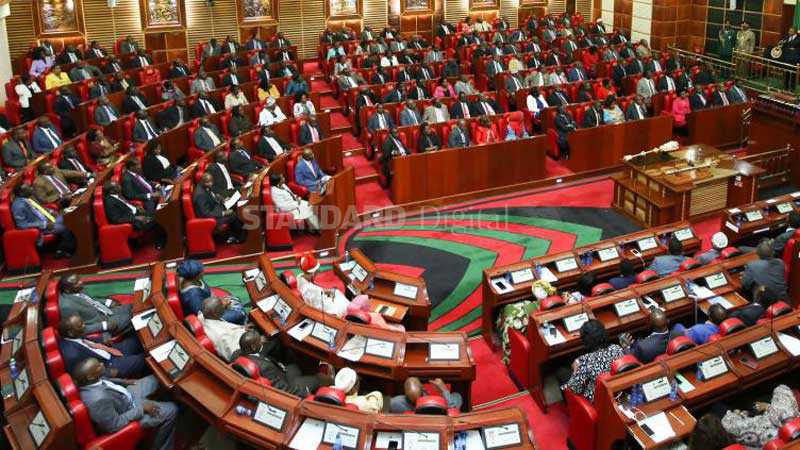 MPs are at it again. Just days after news broke of yet another attempt to increase their perks, fresh details have emerged on how some MPs use House procedures to extort those summoned to appear before them.

Investigations by the Sunday Standard show that there are at least 60 petitions, whose lifespan set by the law has elapsed yet some legislators continue to summon individuals to appear before committees.

Petitions are ideally meant to seek solutions to various problems afflicting Kenyans as well as hold those in authority to account.

Unfortunately though, what ought to be truth-seeking missions have been turned into what insiders call “extortion escapades” from which no one is exempt. Cabinet Secretaries, parliamentary heads, business leaders, have at different times come face to face with members of these committees.

Sunday Standard has also established that it is during the now infamous ‘camera’ interrogation sessions that the MPs are alleged to push for their own interests, often involving angling for tokens or paydays from those appearing before them.

Kimilili MP Didmus Baraza did not shy away from addressing the issue after he drew Speaker Justin Muturi’s attention to some delayed petitions.

“The Speaker has given strict deadlines to conclude petitions yet many are pending for more than three months and others have lapsed. It is a worrying trend despite the hype by the petitioners to whip up emotions,” said Baraza.

“Some of these petitions have shadow sponsors and are expected to serve particular interests. It is wrong to be duped by colleagues only to satisfy their selfish interests,” said another legislator who did not want to be named for fear of retribution from colleagues.

The Sunday Standard has confirmed with several MPs that they have been tricked into supporting petitions that do not meet the threshold set by the House, but sponsors use them to gain mileage or harass unsuspecting witnesses.

And now, the Speaker of the National Assembly, himself a victim of signing off on dubious petitions, hopes to reign in Parliament’s rogue committees.

“If a petition has been lying with a committee and it has not submitted a report within 60 days, anything else it does is a waste of public resources,” ruled Speaker Justin Muturi during a session on October 25.

“If any person is invited to appear before the committee, I have given strict instructions that they should ignore those invitations unless the House, in exercise of its power, has extended the time for consideration of the petition.”

Muturi told MPs that if they are given 60 days and they elapse, they should not waste any more public time and resources inviting people.

“They will not come. The clerk has been accordingly directed not to sign any letters of invitation. He should check when the petition was referred to the committee. If time lapses, they should fold what they are doing and inform the petitioner that they couldn’t finish on time,” he said.

One such petition is that of Tatu City. Members who spoke in confidence were particularly disappointed after it emerged that all the claims in the petition were false.

The MPs are infuriated after learning that one of the factions in the Tatu City wars had sponsored the petition in a bid to push his interests.

A complaint letter to the Speaker by Tatu City CEO Stephen Jennings says the petition was founded on deceit, fraud, misinformation and corruption designed to defraud a foreign investor.

“The petition is a fraud and an assault on the right to property by Tatu City Ltd. It is a carefully designed tool by criminal extortionists out to use the National Assembly as an agent of fraud,” the letter states.

The Sunday Standard has established, through multiple interviews, that the petition was not procured the right way.

MPs get Sh5,000 committee allowance per sitting and a further Sh5,000 every time they clock into the plenary, while the committee chairs get Sh10,000.

In case of additional time, Muturi directed that the committee should seek the leave of the House to extend with reasonable grounds.

A response by Muturi to the complainant advised him to report criminal elements of the complaint to investigative agencies.

Committee chair Rachael Nyamai confirmed that the proprietor had tried to reach her several times but she had not established what his particular interests in the petition were. She, however, denied ever meeting him.

Muturi admitted he too has been approached a few times to revive the Tatu City petition but no credible reasons have been adduced why the committee did not conclude the petition after more than 120 days.

Suntra Investments, Kenya Revenue Authority and Ministry of Lands and Physical Planning have all declared as false the allegations forming the basis for the petition, an admission made by the Speaker.

Explainer: Can anything stop Trump from pardoning his family or even himself?