In a Gazette Notice, Dr Matiang’i declared NRM as an organised criminal group as per the Prevention of
Organised Crimes Act, 2010. 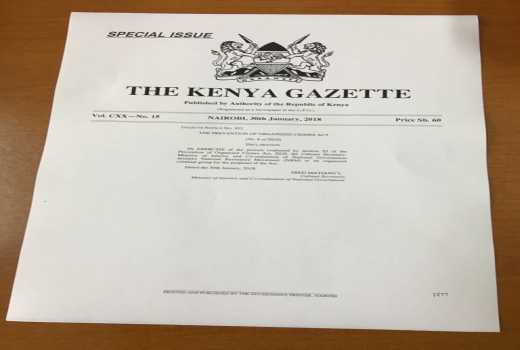 The Government’s move comes hours after Raila Odinga was ‘sworn-in’ at the Uhuru Park grounds on Tuesday as the ‘people’s president’.

Holding a green Bible to his right arm and sandwiched by his former aide Miguna Miguna and Siaya Senator James Orengo, Raila recited his ‘oath of office’ before thousands of NASA supporters that thronged the recreational park.

Wiper Party leader Kalonzo Musyoka, however, did not attend the inauguration.

Speaking shortly after taking ‘oath’, Raila said the event marks the end of electoral injustice in Kenya, adding that Kalonzo will be ‘sworn-in’ at a later date.

The Opposition postponed the swearing-in last year on Jamhuri Day December 12, explaining that they had to wait for Kalonzo who was in Germany by then attending to his sick wife.

Before postponing the swearing in, NASA said they were either to swear in Raila alone as Kalonzo is sworn in later, wait for Kalonzo to come before swearing in both of them or they take representatives to swear Kalonzo in Germany. After consultations, they decided to postpone the swearing in, a decision that left majority of NASA supporters disappointed.

Supporters expected Raila to be sworn in with Kalonzo Tuesday afternoon but Kalonzo did not show up. Tuesday morning, Kalonzo had said they were still consulting before the oath is conducted as scheduled. Kalonzo had also condemned Communications Authority for shutting down national TV stations KTN News, Citizen and NTV at a time when Kenyans were supposed to witness the swearing in.

NASA dismissed Muigai’s warning, insisting that they were operating within the law. Later, Raila Odinga said he was ready to die if that is what it takes to pay for fighting against electoral injustices in the country.