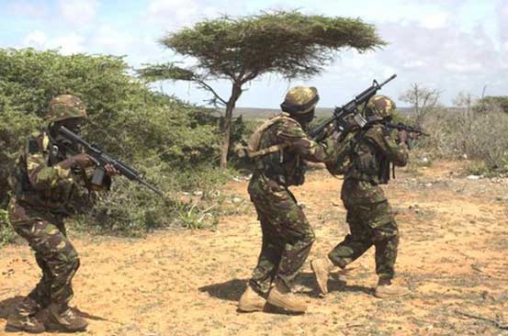 Kenyan troops are feared to have suffered their highest casualty in Somalia yesterday during a fierce battle with Al-Shabaab militants at a base in the south.

The Kenya Defence Forces (KDF) said in a statement that the battle was still going on yesterday afternoon and that there were casualties on both sides.

President Uhuru Kenyatta sent a message of sympathy in which he described the incident at El Adde base as “heartbreaking”.

There were conflicting reports on the death toll. While a Kenyan military statement made no reference to the number of dead, the BBC, quoting Al-Shabaab, put it at 60.

In an initial statement to newsrooms, KDF spokesman Col David Obonyo had said the attack was on a Somali National Army (SNA) camp adjacent to a Kenyan one. He said the KDF soldiers joined the fight on the side of SNA.

However, Somali National Army said the attackers targeted the KDF base.

An El Adde resident told the BBC by phone that he had heard a loud explosion at about 0530 local time (02:30 GMT), followed by heavy gunfire.

“Following the attack this morning on the Somali National Army and the counter-attack by the Kenya Defence Forces (KDF) against the Al-Shabaab militia in El Adde, initial reports confirm that either side has suffered casualties but the numbers are yet to be confirmed since consolidation is still going on,” Col Obonyo said.

But speaking on Radio Andalus, a pro-militant station that broadcasts via the Internet in the capital, Mogadishu, Al-Shabaab spokesman Abdulaziz Abu Musab, said the militants had taken over the Kenyan camp and killed 61 soldiers.

“Our fighters went in and after heavy exchange of gunfire we took over the base,” said Abu Musab. He also claimed the militants had captured 27 vehicles belonging to KDF.

The Standard on Saturday could not independently confirm whether the militants retreated or whether they dislodged the Kenyans from El Adde as alleged by Al-Shabaab.

In his message of condolence, President Kenyatta said: “Our gallant soldiers reacted swiftly to protect their camp... Regrettably, some of our patriots in uniform paid the ultimate price. It is heart-breaking.”

He added: “I want to take this opportunity to express mine and the country’s deepest sympathy to the families and loved ones of the fallen. I stand with you. Our country stands with you. We deeply appreciate the sacrifices made by your loved ones in defence of our democracy, our peace and our security.”

The Coalition for Reforms and Democracy (CORD) leader Raila Odinga said: “Once again, our country has lost some of its best defenders following the attack on KDF troops serving a humane cause in Somalia.”

He mourned the slain soldiers, saying that they died in a valiant effort to keep the country and the world safe. “Their death confirms the danger we continue to face from extremists as a country and a region,” he said.

Sources in Amisom told The Standard on Saturday they suspect the attack was carried out by an estimated 200 militants belonging to Saleh Nabhany Brigade, named after a Kenyan Al Qaeda field operative killed in 2009 by the US drone.

According to the sources in Amisom, the militants arrived in several vehicle-borne improvised explosive devices (VBIED), forged from cannibalised Armoured Personnel Carriers seized from Burundian soldiers by Al-Shabaab in Leego in southern Somalia last year.

“We believe they also had several pick up trucks and had more than one suicide vehicle because one VBIED cannot destabilise our defences,” said an official from military intelligence who spoke from Taraqa where Kenyan soldiers are also based.

The Kenyan soldiers are part of the African Union Mission Soldiers in Somalia (Amisom), a 22,000-strong contingent of soldiers from several African countries trying to restore law and order in Somalia.

Sources within the Kenyan contingent in Amisom said the attack began when the attackers detonated a vehicle strapped with explosives at the gate of the Kenyan camp.

“The Kenyan casualties occurred at the entrance of the camp” according to an official at Busar, KDF’s command centre in the Northern Sector of Jubaland.

The official said the militants detonated the explosives in the vehicles about 100 metres from the KDF camp and tried to storm it with a barrage of rocket propelled grenades and small firearms.

The official disclosed that the militiamen who raided KDF and Somalia’s soldiers, are believed to have driven from Wargadud township, about 40 kilometres north of El Adde.

Kenyan forces captured El Adde from the militants in December 2011 and have about three companies of soldiers encamped there. The region which borders Ethiopia is generally lawless. El Adde is about 100 kilometres inside Somalia from Kenyan border and lies on the main road to Bardheere on River Juba which was captured by Kenyan and Amisom forces in July last year after years of siege.

Militants flow into El Adde from the northern townships and Garbaharrey across River Juba which has never been pacified by the multinational forces and allied militias.

The infiltration of Al-Shabaab militia into Gedo region, which includes El Adde, has been a cause of friction between Kenya and Ethiopia which controls some areas outside Garbaharrey and Ethiopia’s border with Somalia.

An Al-Shabaab official told the BBC that its fighters had attacked the base after morning prayers, starting with a car bomb before storming the facility. “We took control of the base after one hour of fierce fighting,” he said. “We counted 63 Kenyan bodies inside the base.”

If the number of KDF casualties claimed by Al-Shabaab is confirmed, then the attack will be the deadliest so far by the militants against Kenyan military since Kenyan troops invaded Somalia in 2011.

Yesterday’s attack is similar in execution to an attack last September by the militants on a Ugandan military camp in Somalia that killed 12 soldiers.

In that attack, the militants started with a suicide car bombing at the base’s gate, followed by sustained gunfire which lasted more than an hour. However, the worst attack by the group on Amisom troops was in October 2011 when the militants killed more than 70 Burundian soldiers in what is known as the battle of Daynile.

Previous article
Come down hard on those abetting doping
Next article
Pregnancy made me hate my husband's voice, cooking