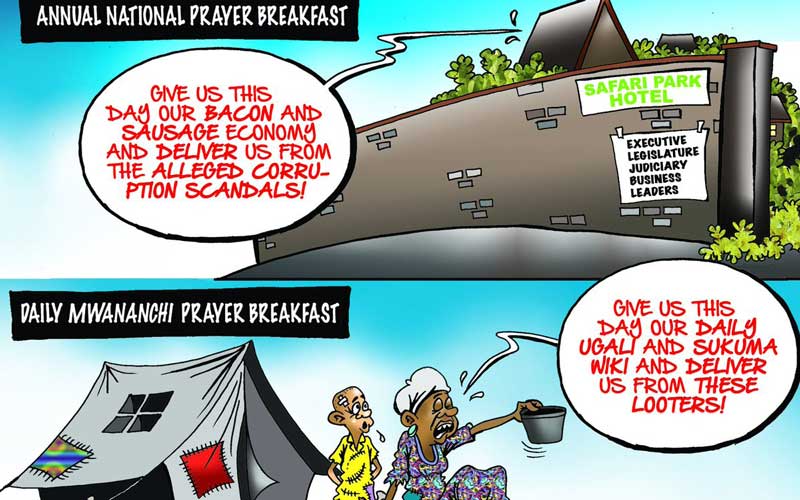 I grew up in a secular household. Appreciating the power of prayer and the difference between spirituality and organised religion came in my twenties. Moments such as the National Prayer Breakfast this week have particular significance for me therefore. Like elsewhere in the world, the role of organised religion in Kenya is a matter of national debate. Even atheists and agnostics have an opinion. Religious leaders are increasingly being called upon to offer a way out of the corruption, impunity and discrimination faced by millions. There are no less than 83 countries in the world that restrict religious beliefs, practises and institutions. Kenya, and we can be proud of this, is not among them. In the last six months, mass attacks on American synagogues, Sri Lankan churches, New Zealand mosques and other places of sacred worship have shocked the world. Both state and social hostility threaten the right to worship globally.

In places like China, the freedom of worship is at an all-time low. As many as two million Uighur Muslims are regularly followed, their phones and blood tapped and scanned for DNA respectively and are denied access to mosques. At least 800,000 have been detained for their choice of religion. Their experience is mirrored by several Protestant churches and congregations. Given the fervour of the political leadership at the national prayer breakfast this week, it is surprising that this does not feature in Kenya’s bi-lateral talks with the Chinese leadership. Fortunately, global trends suggest that religion will continue to be a vibrant moral and intellectual force in the world. For the next 40 years, Christians will remain the largest religious group until Muslims catch up. India will overtake Indonesia as the country with the largest number of Muslims. Christians in the US will decrease from three-quarters to two-thirds of the population. While religious congregations have been greying and balding, interestingly in Africa, there is no significant difference between the number of older and younger adult believers. More remarkably, two out of every five Christians in the world will live and pray in sub-Saharan Africa by 2050. These scenarios are not inevitable. They will only become so if religious leaders continue to speak and act as a powerful force for integrity and social change. All religious texts from the Koran to the Bible are framed around the extra-ordinary power of ordinary actions. By all accounts, the thousands of disciples, prophets and messengers were remarkable hope messengers and active disruptors in their societies. This is the enduring power and pull of spirituality for most. The inconvenient truth we must all face is that there are few religious leaders who still speak from this conviction. In order to fill the tithe baskets, they have lost control of their pulpits. In order to build large religious buildings, they have desecrated places of worship for millions. I am with the Anglican Archbishop Jackson ole Sapit on this one. Religious leaders must now find the moral conscience and courage to reject dubious donations and bribes. This too, should have found its way into the National Prayer Breakfast. I also agree with the Deputy President Ruto on two of the points he made on Thursday. Theft and corruption are bad in any language. It may take a while, but the investigators will always catch the thieves. Having said this, he missed an opportunity in declaring he wished to make confession. A confession is an admission that you have violated a standard of spiritual significance and now request forgiveness. The life share, while emotionally moving, neither admitted a sin nor sought forgiveness for it.

SEE ALSO: Churches open doors on Tuesday; will you enter?

The prayer breakfast was short on real confessions also from South Sudan President Salva Kiir. The violence and desperation that face millions continues to spiral. As he spoke, south Sudanese security services are targeting refugees engaging in legitimate non-violent democratic protest. The stalemate unresolved, the United Nations have also just extended sanctions and an arms embargo for another year. If there is a country that cries out for divine intervention, it is this South Sudan. Unless the new dawn is achieved, Christians across the region should not be surprised to find St Peter standing at heaven’s gates with a metal detector, life style audit forms and warrants of arrests for the few who have professed the faith yet lived and walked another path. Restoring the places and people who worship as the drivers for integrity and social change is the only way to safeguard against this. Happy Madaraka Day all. - The writer is Amnesty International Executive Director. [email protected]