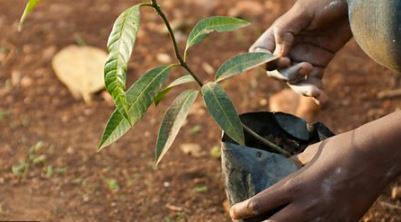 Farmers in Meru have launched a tree planting effort to mitigate against climate change.

The farmers, both young and old, are planting indigenous trees in farms and in wetlands, in an effort to promote conservation agriculture.

The continuing tree planting, efficient energy use and resource conservation is an effort led by the Farm-Forestry Smallholder Producers Association of Kenya (FF-Spark), who have partnered with the Meru County Environment department in the tree planting effort.

Edwin Kamau, the organisation’s programmes coordinator, said the efforts are aimed at mitigating the effects of climate change, and enhancing the community’s agricultural production capacity.

The organisation has partnered with Food and Agriculture Organisation and World Association for Christian Association and the devolved unit in a tree planting exercise in farms and riparian areas, outside the gazette forests.

Areas where farmers have planted trees include; Buuri, Imenti and Tigania, with plans to spread the exercise to Tharaka Nithi County.

“We started the project to sensitise the community on climate change, and top promote indigenous methods of addressing climate change, which has affected agricultural production and caused forest destruction,” said Mr Kamau.

So far, since the project started in Meru around the Imenti forest and the Nyambene forest, over 200,000 indigenous tree species have been planted.

“We have been sensitising local farmers on best practices to address climate change, including responsible use of water from rivers, streams and other sources. Through women and youth we have trained on mitigation measures, we educate communities on importance of tree planting,” he added.

“The fruit trees Governor Kiraitu Murungi distributed in all parts of Meru are progressively changing farms and enhancing food security. This is part of our efforts to change how agriculture is practiced, to mitigate against climate change,” said Mr Mwebia.

Zipporah Matumbi, 61, and Esther Mbijjiwe (65) are among the elderly who are leading efforts to encourage local farmers to plant trees in farms.

“In the old days we seldom cut trees and we want our communities to stop cutting trees for timber and fuel. Back then we had a lot of fruit and medicinal trees, but they are all gone now, because of the irresponsible use of natural resources. We are educating farmers on the dangers of logging,” said Mrs Matumbi.

Interested in the rabbit business? You do not need a lot of money
The most popular breeds used in the meat industry are New Zealand White, California White, Flemish Giant, French Ear lop, Chinchilla and Dutch.
Livestock
By Dr Paul Kang’ethe
5 hours ago
.

Interested in the rabbit business? You do not need a lot of money
Livestock
By Dr Paul Kang’ethe
5 hours ago
Why you should not feed rotten grains to cows
Livestock
By Dr Joseph Othieno
5 hours ago
Premium
Farmer's fortunes changed by growing cassava
Crop
By Japheth Makau
2 days ago
Kirinyaga farmers take up organic farming
Crop
By Jane Mugambi
2 days ago
Climate Change: Grazing systems cut ASAL Kenya drought risk
Livestock
By Kelley Boss
1 day ago
.