Why Men Say No To Sex

Between The Sheets By Jennifer Karina 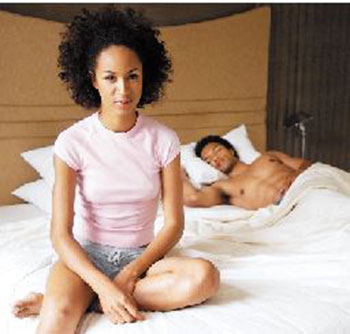 Many research findings conclude that the number one priority for men in relationships is sexual fulfillment. The assumption, therefore, is that men are always on a ready-to-go mode when it comes to sex. Right? No, that is an assumption! Generally, low sex drive is associated with women, who are most often overwhelmed by their wifely and mothering responsibilities.

Little is said about the man. But the truth is there are men out there who are simply not interested in sex. I was surprised by the number of responses seeking help on this topic.

Joyce, in response to my article on Sex is Sizzling after 40, said she could not agree more. At 40 her sex drive has shot through the roof. She had this to say: “I have never felt this way, thinking, dreaming and craving sex. My husband loves me greatly, I know that for a fact as we have related well and stayed committed to our marriage vows seven years later.

The challenge, however, is that while I need to be enjoying sizzling sex, my partner has always had a low libido since we got married, having sex once in three months at the most. As time has passed on, his sexual desire has declined drastically; challenging our relationship greatly. He never wants us to talk about it and it is usually a nil by mouth relationship.

For a long time, I blamed myself, feeling unattractive, unworthy and not sexy enough. This makes me feel frustrated and angry; I cannot live with this rejection. I am tired of begging for his attention, to touch me, to hold me, to affirm me. What do I do?”

Joyce is not alone, there are many women who suffer in silence with partners who show little or no interest in sex. This is challenging to the relationship and many women wonder whether having an affair is the best option. Certainly not.

There are several reasons why a man would say no to sex; Studies indicate that the reasons for the lack of interest are 30 per cent psychological and 70 per cent physical. This may be as a result of performance anxiety, past sexual experiences, stress, guilt, depression, familiarity or hormonal; low testosterone levels, alcohol and drug abuse, ageing and poor lifestyle choices.

It also could be that the partner is withholding from sex to hurt his wife, an act of aggression in a passive way, due to unresolved issues in the relationship.

Generally, men would rather not discuss this topic to protect their ego and prefer to fight or flee, living in denial rather than deal with the situation. For survival, many blame it on their wives using avoidance and blame game. This causes a great deal of pain, hurt and frustration to the wife and if not dealt with can destroy the relationship.

Whatever the case may be, it is important that the state of affairs does not go on endlessly without resolve. Not dealing with the issues has the potential to destroy any relationship as it frustrates both the partners.

It is wise to seek the help of a professional. While you remain sober and patient with one another, exercise unconditional love.

Live, love and thrive because you deserve it!

The writer is a relationship coach and author, Marriage Built to Last. You can reach her on; www.jenniekarina.co.ke