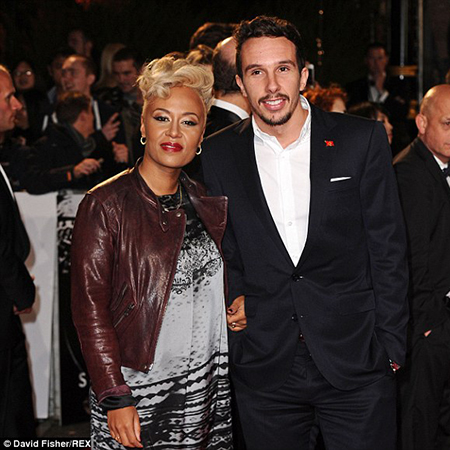 Emeli Sande has confirmed she has divorced her husband after just a year of marriage.

The 27-year-old singer has revealed she came close to suffering a "breakdown" after splitting from her childhood sweetheart Adam Gouraguine - who she dated for 10 years - last year and admitted she is still coming to terms with losing her "best friend".

Emeli - who married Adam in his home nation Montenegro in September 2012 - told The Times newspaper: "Everyone thought I'd gone mad. 'What do you mean a divorce? We were all at your wedding a few months ago!'

"But there was just something inside me that said, 'This isn't the life. You're pretending to be someone else.'

"And that's so hard to explain to someone. I can't even explain it now.

"I just felt I had to wake up. I'd been sleeping and things were happening. I could get up on stage and sing but, I don't know, it was just a real ... I don't want to call it a breakdown, but it felt like that.

"I think I spent the couple of months after not in denial, but not really dealing with what had happened.

"Adam and I had been together since I was 17. He was my only boyfriend. That's the only person I've been with for the past 10 years.

"So [losing] our relationship more than the marriage was the big part for me to deal with.

"Having a friend who'd been my best friend for so long ... losing that support and structure in my life was the biggest thing."

Emeli - who debuted a new straight fringe look at the MTV European Music Awards in Glasgow, Scotland last night - regrets ever getting married to Adam because their lives were "so separate".

But she insists she doesn't have a bad word to say about him and is going to keep her tattoo on her left breastbone, which reads "I love you Adam" in Serbian.

The 'Heaven' hitmaker, who is now single for the first time since she was 17, added: "I was on tour all the time and I think it was quite unfair of me to want his world to fit into my life so much.

"He'd come on tour then he'd go away for three months on a marine biology expedition somewhere.

"When we caught up it was great and we could tell each other stories, but it was almost like we were living our lives away from each other and growing into different people.

"And as soon as I got some rest and the madness stopped and I had a bit of a holiday, I was like, 'OK, let's see, what's been going on.'

"There were just lots of things. And stuff that just wasn't ... we were mates, but maybe we shouldn't have been married.

"I just didn't know who I was. And I felt I was being taken further and further away from who I really was and from my family.

"He was the person that had been there from the very beginning. And maybe I was just looking for."

MDQ: Why I moved Blankets and Wine to Kasarani
Showbiz
By Boniface Mithika
9h ago
Why we put phones off when flying
Lifestyle
By Jayne Rose Gacheri
9h ago
Celebrities who have their body parts insured for millions
Showbiz
By Fay Ngina
9h ago
Man charged in Takeoff killing says he's innocent
News
By AP
14h ago
Man who shot Lady Gaga's dog walker gets 21 years in prison
News
By AP
15h ago
.