Boy born with tail worshipped as a god 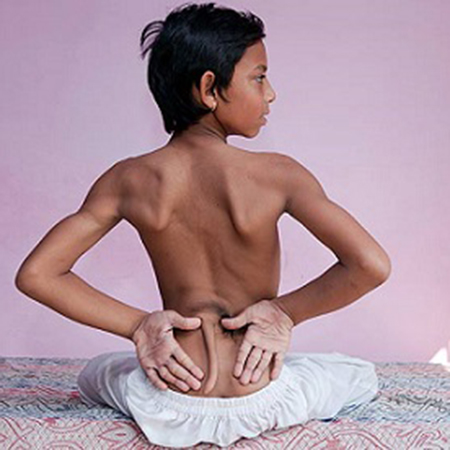 A boy with a seven-inch 'tail' is considering having it removed - despite being worshipped as a God.

Arshid Ali Khan, 13, may lose the growth even though it made him a divine symbol in the state of Punjab, India.

The teen, who is bound to a wheelchair, has been hailed by locals as an incarnation of the Hindu monkey god Hanuman - and refer to him as Balaji.

He said: "This tail has been given to me by God. I am worshipped because I pray to god and the wishes of people come true.

"I feel neither good or bad about having a tail."

Arshid now lives with his grandfather, Iqbal Qureshi, and two uncles, after his father died when he was four and his mother remarried.

Iqbal, a music instructor, said: "When he spoke for the first time at the age of one all he spoke was the names of Gods from different religions.

"It was that day I realised that he had something divine and godly about him."

He added: “It does not matter whether we are Muslims or Hindus, I think there is just one path for spiritualism.”

Arshid's home was then converted into a temple where his devotees would come to visit him to receive his blessings and touch his tail.

“A lot of peoples' wishes have come true after they have visited," claimed Iqbal.

"Sometimes there are childless couples who come to Balaji for help. He blesses them, and often they are then able to conceive."

However, Arshid often struggles to balance his time with his faithful devotees and attending school and playing with his friends.

“Mostly on weekdays I have to go to school but when I have a school holiday on Sunday around 20 to 30 people come to see me at my home,” said Arshid, who said his schoolmates have accepted his unorthodox lifestyle.

“No one teases me. Everybody wants to see my tail and so they keep asking,” he said.

Despite his supposed powers, Arshid has been bound to a wheelchair for most of his life - suffering from an undiagnosed disorder.

Some doctors have told them it is down to brittle bones while others have said it is due to the 'tail' growth protruding from his spine.

This month he is due to see a doctor who has said he can successfully remove the appendage - but his family are sceptical and say they would rather he kept his tail than undertake a risky operation.

But his granddad Iqbal said: “It is for Balaji to decide. If he wants to get the tail removed, we do not mind.

“He has trouble walking and so we are asking doctors what can be done."

As for Arshid, he does not believe the removal of the tail will stop the crowds flocking to his house for blessings.

He said: “Doctors can remove my tail - but people will continue to believe in me."

Earlier this year, a boy with a 12-inch tail was also revealed to be worshipped as a Hindu god.

Viola Davis' Grammy win for audiobook makes her an EGOT
Showbiz
By AP
15h ago
Tems writes her name in Grammy history as first Nigerian female to win
News
By Fay Ngina
18h ago
Exploring Amboseli on a hot air balloon
Lifestyle
By Jayne Rose Gacheri
21h ago
List of Grammy winners in top categories
News
By AP
23h ago
Beyonce breaks Grammys record, is now most-decorated artist
News
By AP
23h ago
.