Back from the dead: Controversial preacher claims to have brought a little boy back to life 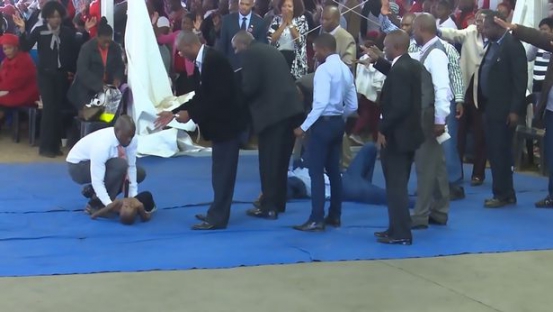 A controversial pastor who once insisted God had blessed him with a private jet that no one else can see has now claimed to have brought a little boy back from the dead.

Bizarre footage shot inside a church in the South African city of Pretoria shows healers purportedly reviving a youngster they say had been declared dead by doctors.

The boy can be seen hanging lifeless and floppy in the arms of prophet Shepherd Bushiri.

As the prophet stumbles around holding the boy, the youngster's head flops limply back and forth, with the supposed resurrecting service appearing to tire the pastor.

Other men go to support Bushiri as he falls to the floor before the watching congregation of the Enlightened Christian Gathering Church, who hold their hand out towards the boy as if helping to heal him.

The footage, which has gone viral, then shows the young boy being blessed with holy anointing oil, named the Lion of Judah.

We do not see the boy wake up but the footage then cuts to the youngster sitting on his father's knee, alive and awake.

He is handed a commemorative cloth which claims he was healed by the Malawian prophet Bushiri, who is well known for his controversial claims and lively Sunday services.

He previously claimed that God granted him with a private jet that no one was allowed to see but him.

He has also released a video in which he purports to "walk on air" - a claim rubbished as "fake" by beady-eyed viewers who pointed to the shadow of a man supporting him.