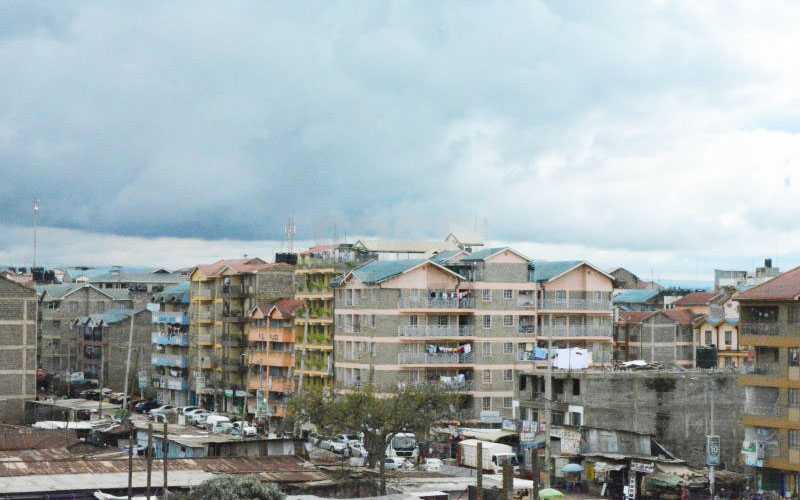 On Saturday mornings, the estate is awash with young women moving in and out of pharmacies for the morning-after pill Contraceptive pills sell like hot cakes with some of the ladies in the estate disclosing that they hold sex parties when their sponsors are away

The filthy row of shanties, cheap liquor, miraa dens and noisy garages in Roysambu are deceptive. Behind the repulsive front lies a scandalous secret of debauchery.

Every male creature with a dollar to burn and a midlife crisis to fix wants a piece of Roysambu because this is mpango wa kando haven, the place where old moneyed men plant seeds on rocks before trooping home to their aging wives, who they respectfully introduce as ‘madam’ or ‘mama’.

At any time of the day, Roysambu’s three major roads, Lumumba Drive, Mirema Road and Thika Road Mall (TRM) road teem with lasses in pretty little cars beloved by the ‘sponsored’ . This is the only city estate where you will find hundreds of cars parked on a busy working day and young men and women hanging out in pubs or walking around in sexy attire.

Contraceptive pills sell like hot cakes. On Saturday and Sunday mornings, the estate is awash with young women moving in and out of pharmacies for the morning-after pill, if not staggering home after raving the whole night. Too tired to do laundry, the chicks prefer for dry-cleaners, where a where 10 kilos of dirty clothes are cleaned for Sh600 and four kilos are charged Sh400, which is the minimum price charged by laundromats.

But why Roysambu? Simon Ngatia, a real estate agent, says the estate and the thriving sex business are three decades old. But the notoriety took a new dimension when Thika Highway was expanded, followed by the construction of TRM. That’s when young sexy university girls invaded the neighbourhood in droves.

“In the late 1980s, there was nothing much to write home about Roysambu. What we had was a slum called gicagi kia ndurika (the village of wicked people). There, sex was the in-thing. HIV/Aids wiped out generations before it was demolished to give way to a Kenya Power sub-station. The remaining population shifted to what is today known as Roysambu,” says Ngatia.

He says the estate developed into a haven for ‘kept’ women because it is hidden, easily accessible from the highway, has relatively decent apartments and good security, and the community is generally not nosy about creaking beds and soft moans.

“Apparently, it is normal for old men to visit, pick and drop young girls without raising eyebrows. Because most of the ladies are university girls, they could be related to the wazee as their mpango wa kando or they could be their relatives. But who cares, everyone minds their own business here. And talking of business, Roysambu is thriving, with most of the businesses kept afloat by these young women and their sponsors.

“As an agent, I bump into big men panting up the stairs and I just say hi. If it was in Githurai, Mwiki, Umoja, Kangemi or Maringo, the whole estate would assemble to jeer or even rob the men. In Roysambu, we don’t poke our noses in other people’s affairs. We just make our money and life goes on,” says Ngatia.

Families, especially those with teenagers, find it hard bringing up children here. Some have been forced to move by the rise in the cost of living in Roysambu, mainly due to the untamed spending by university students.

Nancy Muli (not her real name) who has now relocated to nearby Kasarani, says that as a university student, she was among a group of four girls who rented a one-bedroom apartment in Roysambu three years ago. Then they embarked on hunting for ‘sponsors’ in major entertainment spots along Thika Road and in town.

“The location of Roysambu is ideal because there are a number of universities on Thika Highway and the students can share a house. When one of the girls got a moneyed ‘boyfriend’ she got him to bring his friends along, who also hooked up with the girl’s pals. Ni hali ya kuokoleana. Over time, mpango wa kando have colonised this estate. I relocated when I got married,” Nancy reveals.

These women, usually aged between 18 and 30 years, are kept by powerful and wealthy politicians, businessmen and celebrities. They are the reason some Roysambu apartments have biometric access security systems for gates and modern fittings.

“New apartments coming up are informed by the tastes of these young girls. Property owners have to do market research to find out what will be attractive and snapped up. In particular, privacy is key,” says Pius Katitu who is supervising an apartment under construction and has been a caretaker here for over 10 years.

Life here orbits around boozing, driving around and servicing sponsors. For those who are students, books come a distant third in terms of priority, if at all.

The Nairobian interacted with some of the ladies in the estate who disclosed that they hold sex parties when their sponsors are away. You walk into the party wearing one shoe, and leave the other at the door.

Whoever picks the shoe will be your sex partner during the party, of course after getting wasted with booze that is bought using money dished out by the absent sponsor.

“Our lifestyles are maintained by rich and powerful men - some old, some young. Some of us have two houses here, one rented and furnished by a sponsor and the other by our parents. To survive and enjoy the city life while schooling, we have to date old men while still keeping our young boyfriends in secret. These young boyfriends are our fall-back plan with the potential of being our husbands in future,” a student who is being kept by an old, rich businessman confessed.

The girl who is in her mid-20s hopes to get a small car from the sponsor before he moves on to a younger girl.

Prominent personalities with young side chicks here include a western Kenya politician, a popular senator, a controversial Mt Kenya governor and a popular musician. They are known to visit their gacungwas regularly, although politicians have devised ways of sneaking in undercover.

While some pick and drop their girls openly, others park at the nearby mall and are then discreetly dropped at their mpangos in unassuming cabs.

“They park at TRM, some popular club nearby or at an exclusive members’ club then sneak into their love nest. May be the cars have trackers, or probably they want to throw off any suspicious characters who may be poking their nose in their business. The wife would not suspect a thing as her man would be just ‘having drinks with the boys’,” says a taxi driver who has been dropping and picking sponsors visiting their young chicks in the estate.

He revealed that he made enough cash to buy a piece of land by ferrying young girls to their aging ‘clandes’ at joints in Westlands.

The estate has over 25 chemist shops, more than 30 pubs, wines and spirits joints, dozens of butcheries and nearly every building has an agent offering money transfer services.

Joseph Kagethe runs a butchery and on average, he gets 50 customers buying meat worth between Sh100 and Sh500 daily. Some pay at the end of the month or weekly. “They tell me they will pay when mzee comes. They keep our businesses alive and the competition is stiff. We give them value-addition by throwing in tomatoes, dhania, onions or peeled waru at no extra cost,” says Kagethe.

It’s all fun, until the sponsor moves on. Ngatia who has witnessed abandoned girls forced to start fending for themselves and rent cheaper houses elsewhere, says the turn of events could be embarrassing and devastating to the girls.

“Many walk out with only a bunch of clothes in cheap bags, leaving the flamboyant life and pricey furniture behind. At that time, they can easily fall for any man who offers to provide accommodation because they are desperate,” says Ngatia.