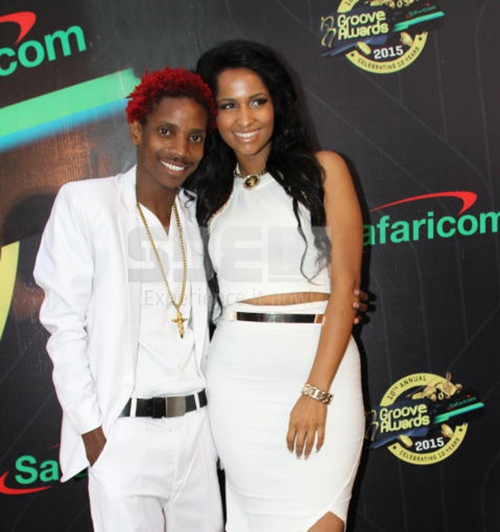 Two months ago, comedian Eric Omondi exclusively revealed to the Pulse magazine that he plans to get married before the end of this year.

The comedian surprised many on the 2015 Safaricom Groove Awards red carpet when he showed up hand-in-hand with his fiancée, Shantel Grazioli, who happens to be half Kenyan-half Italian. The beautiful Shantel, her mother Nancy Grazioli and Eric Omondi, all glad in all-white, took their time with our paparazzi and told it all.

“I really love this lady, not because she is beautiful but because of her personality, it’s rare to find a beautiful lady with an equally beautiful personality,” Eric told Pulse during the interview. The two are said to have met during the Kenya at 50 show at Kasarani.

“We met through her mother during the event when she introduced her as one of my fans and since then, the rest is history,” Eric added. Plans for their marriage are said to be at an advance stage since the two families have met and held discussions on the same. Shantel is said to be planning to relocate from Italy to Kenya, just to start a family with Eric.

The two lovebirds flew to Mombasa for some private time immediately after the Groove Awards.

Premium
Eight life lessons from eight interviews
Features
By Jacqueline Mahugu
2h ago
Here is the Kalasha Awards winners' list
African News
By Standard Entertainment
4h ago
Yvonne Adhiambo: My loyalty's only to the story
Features
By Gloriah Amondi
12h ago
100 years: A social club for all seasons
Showbiz
By Kirsten Kanja
12h ago
How trends have influenced Kenyan music
Features
By Muhunyo Maina
12h ago
.