Meet the wrong G of the (mokorino) kikuyu rap fame 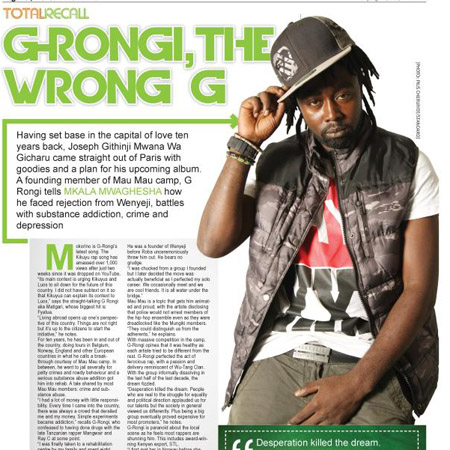 Mokorino is G-Rongi's latest song. The Kikuyu rap song has amassed over 1,000 views after just two weeks since it was dropped on YouTube. "Its main context is urging Kikuyus and Luos to sit down for the future of this country. I did not have subtext on it so that Kikuyus can explain its context to Luos," says the straight-talking G Rongi aka Matigari, whose biggest hit is Fyatua. "Living abroad opens up one's perspective of this country. Things are not right but it's up to the citizens to start the initiative," he notes. For ten years, he has been in and out of the country, doing tours in Belgium, Norway, England and other European countries in what he calls a breakthrough courtesy of Mau Mau camp. In between, he went to jail severally for petty crimes and rowdy behaviour and a serious substance abuse addition got him into rehab. A tale shared by most Mau Mau members: crime and substance abuse. "I had a lot of money with little responsibility. Every time I came into the country, there was always a crowd that derailed me and my money. Simple experiments became addiction," recalls G-Rongi, who confessed to having done drugs with the late Tanzanian rapper Mangwair and Ray C at some point. "I was finally taken to a rehabilitation centre by my family and spent eight months getting clean. It was an expensive affair and I had to leave the country to get my sanity back," he adds. In 2012, G Rongi went to Ghana for a year before going to France where he has bought a house. "I always knew I would be a superstar and when Mau Mau became fully functional, I had  chosen rap. Interestingly, the famous Mau Mau base where there is a wall with murals is actually where I lived. I let the camp make that their base," the Tana River-born but Dandora-raised artiste informs me. He was a founder of Wenyeji before Roba unceremoniously threw him out. He bears no grudge. "I was chucked from a group I founded but I later decided the move was actually beneficial as I perfected my solo career. We occasionally meet and we are cool friends. It is all water under the bridge." Mau Mau is a topic that gets him animated and proud, with the artiste disclosing that police would not arrest members of the hip-hop ensemble even as they were dreadlocked like the Mungiki members. "They could distinguish us from the adherents," he explains. With massive competition in the camp, G-Rongi opines that it was healthy as each artiste tried to be different from the rest. G-Rongi perfected the act of ferocious rap, with a passion and delivery reminiscent of Wu-Tang Clan. With the group informally dissolving in the last half of the last decade, the dream fizzled. "Desperation killed the dream. People who are real to the struggle for equality and political direction applauded us for our talents but the society in general viewed us differently. Plus being a big group eventually proved expensive for most promoters," he notes. G-Rongi is paranoid about the local scene as he feels most rappers are shunning him. This includes award-winning Kenyan export, STL. "I first met her in Norway before she even hit it big but I recently asked her to collabo with me and she was hesitant. I've had the cold shoulder from a number of rappers and I just think I'm either paranoid or these rappers are not up to my game," the boisterous G-Rongi opines. He is currently working with Provoke and HP Records for his upcoming album that will include artistes form as afar as Peru and Colombia. "Early next year, You should all be watching," is his final promise.