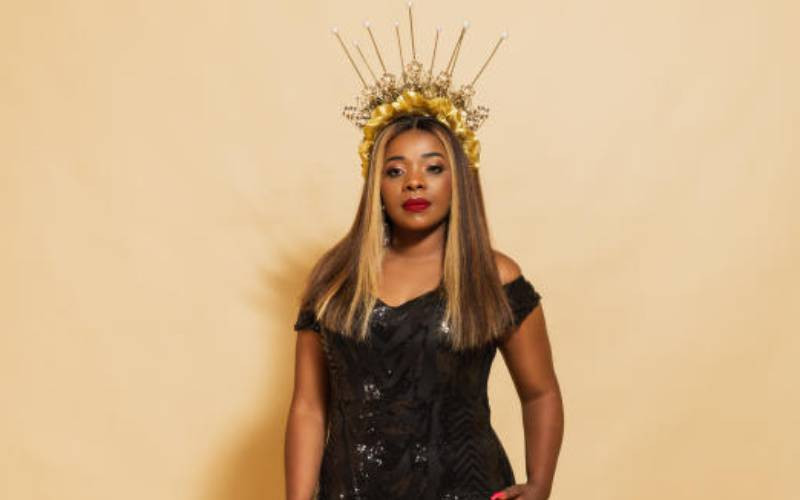 Justina Syokau (pictured) is probably the most popular gospel artiste in Ukambani. She has a stage power for seven, is vibrant and has never been afraid to tell it all.

This year, she released a song praising President William Ruto after which she declared she was ‘bankrupt’. Now, she is back with a new good challenge; to prove that she is indeed the biggest artiste in Eastern Kenya.

In this year’s PMVA, the Twendi Twendi singer has been nominated in the Eastern Video of the Year category alongside the ‘Ladies man’ Toby Bisengo, Victor Mbuvi, Alex Kasau aka Katombi and Maima.

While all five have a huge following with their songs making them household names in the region, it is Syokau’s grass-to-grace story that seems to have made her a force to reckon with.

On December 28, 2019, three days after New Year, Justina Syokau was a nondescript personality, perhaps only known to her immediate circle of friends.

Later that day a 30-second clip of a woman in a red figure-hugging dress cut above the knee was doing rounds across social media platforms.

It was Justina’s newest single, Twendi Twendi: the Akamba-nised version of year the New Year, 2020.

The song, sung in a genre synonymous with artistes from the former Eastern Province, was all the buzz.

Not so much because of video and audio quality but probably because it served a proper dose of comic relief for the many who thought it typical of Akamba culture.

“In my community, we sing about occasions,” she says. “If there are floods we sing ‘Mavuliko’. So, the new year, I felt, was something worth singing about.”

Fans have mostly been interested in the theatrics of her performance. But there is more to the leg-shaking lady.

Justina, a native of Machakos first made money selling charcoal and firewood.

“I had just finished high school and there was no money for college. So I went home and sold charcoal and firewood,” she says.

Her earnings were meagre, and she soon started to farm vegetables for selling.

“This too did not work,” she says. “Nothing was working!”

Four months later she received a job offer in Nairobi. She would be paid Sh700 a month working as a house girl.

“I was elated to have this job because I was assured of meals, showers and I could watch gospel artistes on TV.”

Justina says she was fond of gospel music because she was born-again and subscribed to the Christian faith.

She loved watching and listening to hits from celebrated artistes like the late Angela Chibalonza and Esther Wahome.

On Sundays, she sang in the church choir.

“I loved evangelism. I was a church girl. I was always prayerful and hopeful for the future,” she says.

In 2012 Justina changed jobs thrice; at some point, she worked as a hospital assistant at AIC Kijabe Missionary Hospital.

“I also served in church (at the hospital) as a singer and a dancer,” she says.

Her life would soon take a different transition.

“With contributions from friends, I began recording music.”

A music career had become her main focus since the day she beat 297 contestants to win a streetwise music contest sometime in 2009.

“I sang in Kikamba and the crowd loved it. People in the audience urged me to start recording. At the hospital, my songs played on screens; patients, doctors, and nurses loved my songs. I would sell CDs to people in church and at gatherings,” says Justina.

Then came January 2012 and her life would drastically change. A man she had never met, whom she suspects got her phone number from a CD he bought from her rang her.

“He told me that he met me at a friend’s wedding where I had performed a few of my songs. He said he liked me and had bought many CDs of my work,” she says.

The man did something else that caught Justina off-guard: he asked for her hand in marriage.

“He said he was serious about acquiring a wife and he did not want to waste time dating. I convinced myself that I needed a husband like that; a man who had church qualities, a born-again man who prayed. A man with a strong personality, someone who could promote and manage my music career. The fact that he wore nice clothes was a bonus,” says Justina.

What followed was a cavalcade of introductory meetings: he introduced Justina to his friends and family and soon they were an item.

In June of the same year, the couple decided to tie the knot in church.

But the good tidings were soon over. Immediately after the wedding, her husband began acting wayward. He was no longer as charming. And his mother, with whom the couple lived with, developed animosity towards her.

“I did not even enjoy that marriage: things went south immediately I said I do,” she says.

The strife between her and her husband made her miscarry her first pregnancy.

Not long after she got pregnant, and in August 2013 she gave birth to a son, Nixon. But not even the birth of Nixon would save her marriage.

“I was discharged after three days in hospital and got home to find a hostile mother-in-law. Even before I could stay a week my husband ordered me out,” says Justina.

“I went straight to the streets. I joined other street families under the Muthurwa Bridge. For three weeks we ate leftovers and slept on pavements,” she says.

“When I came back to Nairobi a church lady took me in. I went back to singing in church. I wanted to get back to where I was before 2012.”

“I live with my son and a nanny: I am grateful that we are no longer in a desperate place. We can afford food and rent,” she says.

Besides emceeing and event organising, her main occupation is music. Last December she held a concert in Machakos to celebrate 10 years since she began recording music.