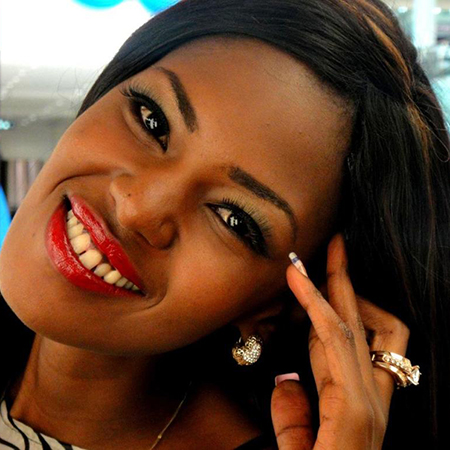 Nonny Gathoni is famous for hosting The Wedding Show on television. She was recently appointed Going Green Campaign ambassador and is also the goodwill ambassador for Macha New Year’s Eve celebrations. She spoke to CATE MUKEI about struggling with a foreign accent, social media haters and behind the scenes drama of her show.

You are one of the pioneer presenters for reality TV in Kenya. How did you get so far?

I always knew what I wanted as a child. I knew I wanted to be different. The only problem is that I did not really know how. Luckily, my mother was there to mould and direct me towards the right path. She basically helped me achieve my dreams.

You sound like you had the perfect career path?

On the contrary, this was not the case. I worked at Citizen TV’s newsroom for three months, but I wasn’t happy there. I knew I would not do it for long.

What was wrong with the newsroom?

It was challenging, and I found news rather boring. I especially found reporting live quite difficult. Then there was the issue of the accent.

Having studied in the US, I had worked too hard to acquire the American accent.

Why was it necessary to acquire an accent?

To avoid unnecessary attention as ‘the exotic girl from Africa.’ I just wanted to study and probably work for CNN.

Unfortunately, when I came back home, I could not drop the accent and this was not really good for me in the newsroom. The Kenyan audience wants someone they can relate to. Someone who speaks like them.

How did that change you?

Well, it taught me how to stay focused on my professional work. Because if they were not hating on my accent, they would be hating on my looks. I had to develop a thick skin. My father speaks the Queen’s English, my mother on the other hand is very eloquent and they gave me the best education. I don’t see why I should be guilty for being the best.

So, at what point did you finally do what you really loved?

I love cameras. I love fashion and glamour.

One time, my boss (Wachira Waruru) attended a wedding in West Africa, and when he came back, he told me he wanted to start a wedding show.

He had seen me host a red carpet event and thought I was the best person to host this show.

Any challenges while beginning the show?

At first, I had no contacts. I had to use my friends for the first few weddings. After that everything fell into place.

How did you get invited to Bobby Wine’s wedding?

I had covered a senior politician’s daughter’s wedding in Uganda. Bebe Cool got to watch it, and he liked it.

What are some of your achievements in the show?

I set a trend. Most wedding organisers used to call me for previous clips to help in organising weddings.

If I covered a wedding with green and orange theme for instance, people would copy it. I also realised that I set the trend so high that even when I left the show to start my own, which is sponsored by Bailey’s, my fans were not so happy. Some people may not like the current presenter of the wedding show and would ask me why I settled on Sarah Hassan. Truth is, that was not my call.

Which is the most extravagant wedding you have ever attended?

It was for Ugandan tycoon Godfrey Kirumira’s daughter. Her name is Brenda Kirumera. She was getting married to an engineer named Patrick Lubowa.

Brenda then introduced me to Bobby Wine, who had an equally expensive wedding.

It was rumoured to have cost around Ush300 million (Sh10 million).

You once attended a wedding in Israel. How did you get the invite?

They looked for us, and the company organised our travel.

They were an older couple from Kenya who just wanted to walk the path Jesus had followed.

Thirty of their friends travelled with them. It wasn’t an extravagant wedding save for the travelling expenses.

How much do you charge to feature a wedding?

Nothing at all. We generate revenue through advertisements.

Are there behind the scenes drama?

That happens a lot, for instance, sometimes we have to deal with ‘Bridezillas,’ mean mothers-in-law.

There have been cases where after so much drama, the couple asks us not to air the wedding after all the effort we have put to shoot and produce the whole event.

However, at the end of the day, we try as much as we can to remain professional.

What criteria do you use to choose the weddings?

We get lots of invitations, but I’m always keen on something that is different. For instance, if I’m to choose between a ballroom and garden wedding, I will definitely go for the ballroom.

Which is the most disappointing wedding you ever attended?

All weddings are different, and none is disappointing. Every wedding is exciting.

Are you dating, and what is your dream wedding?

Yes, I’m dating. But the last time I spoke about my wedding plans, some people called me to ask if they could deliver flower samples the following weekend! I’d rather not get into details now.

How did you become the Machakos New Year festival ambassador?

I just received a phone call and that was it. I was equally shocked, but that goes to show that people have seen what I can do and they really want to be associated with my success. Besides, I’m also into charity.