Scholars clobber each other in pub over a theory 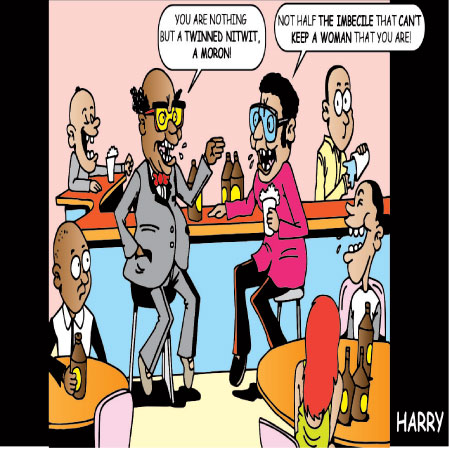 Scholars clobber each other in pub over theory

Revelry and merrymaking at a popular restaurant in Kerugoya town, Kirinyaga County came to a standstill, when two professors got into a fierce fist fight after they differed over a theory.

The two professors, dons at different local universities, had strolled into the club like all the other revelers in celebration of New Year festivities.

Those who saw the two academicians walk in claimed they looked like two long-lost buddies, reunited by the festive season.

Engrossed in an animated chat, laughing out loudly and occasionally giving each other a ‘hi-five’, the two scholars strolled to a corner table. At the beer packed table, the two conversed — at length— on books and academia. The discussion was punctuated with complex English words that people hardly use in normal conversation.

As more beer flowed with laughter getting louder, the discussion not only increasingly became philosophical, but also arrogant.

All seemed well, with their philosophical discussion being almost overwhelmed by the loud music that was playing in the restaurant.

However, trouble is said to have started after the two dons started discussing the legitimacy of Christmas festivities.

One of the dons, who is from the science field, rubbished Christmas as a fallacy, claiming that the festivities were a waste of time.

“Does it have to take rocket science for you to understand what I am saying? Religion is supposed to be a poor man’s opium not cocaine for educated people like you!” he scoffed at his friend, amid a sarcastic chuckle.

The remark angered his colleague who had spent most of his earlier days ‘chewing’ theology books. He hit out at the scientist as a boring person who had been unable to keep a wife.

“Your thinking is so constrained to formulae and equations that it is even hard for you to keep a woman in the house. Come back to the real world my friend!” he retorted, patting him lightly on the shoulder.

The argument became so loud that the two dons started barking at each other’s face from across the table. The noise drew the attention of other revellers in the bar — most of whom were university students and regular patrons of the watering hole.

Tipsy and spoiling for a verbal combat, some of the students joined the fray. They took sides and immediately began weighing in with mocks and taunts.

One of the students, in a drunken slur, shouted: “Tell that fool that we have also chewed books. We are logical thinkers and do not go about cramming theories and formulae we have little understanding about!”

But his scornful slur evoked a scathing verbal attack from an Art student at another corner of the restaurant.

“Who doesn’t know you? You survive your four years of campus at the mercy of Mwakenya (exam cheating)! Damn idlers, go back to the village and heard goats!” retorted another.

In the course of the heated exchange, one of the dons accidentally hit his colleague’s drink shuttering the bottle to pieces. Asked to pay for the drink he had poured, the don resulted to more criticism that earned him a hard slap from his colleague.

The sound of shattering glass filled the air as the two dons tore into to each other. Bouncers at the club intervened and separated the two before dragging them outside, to restore order.