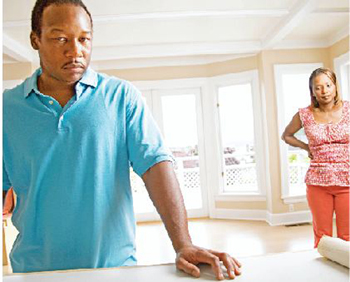 The baby daddy trend is quickly become a common phenomenal in today’s society. Today, most single men seem to have a child tucked off somewhere with an ex or as a result of a fling. And like with any new trend or movement, it often comes with its share of drama and complexities.

For the uninitiated, a baby daddy is the father of a woman’s child who is not the current mother’s husband nor boyfriend.”

You would think it is obvious that if a party participates in the creation of another human being they automatically become responsible for the upkeep, but shockingly, that is not the case on the ground.

In fact, in most cases, men have to literally be dragged to court, in order to be compelled to pay child support. Interestingly enough the reasons men often give for ditching their fatherly obligations are outrageous and often unjustified.

The main defence most baby daddies give for not paying child support is playing the victim card. They proudly refuse to pay child support because they claim they were trapped into fatherhood. Apparently, child support laws gives women a strong enticement to get pregnant and thus ‘trap’ men into financially supporting them.

Another excuse men use to justify avoiding their fatherly obligations is the fact that they hate the mother of their child. So because they hate her, they believe it is justifiable and okay for their child to lack school fees and sleep hungry. It is unfair to make an innocent child suffer because his father cannot stand his mother.

Then there is the mistaken bunch who only believe they have a responsibility towards their child as long as the mother of their child is single, but that once she gets a new man, then all daddy responsibilities ceases.

Why a father would think his responsibilities towards his child or children ends because there is a new man in the picture, is just plain old irresponsible. Fatherhood is a lifetime commitment, it’s not conditional or something to be pawned off to others.

Bottom line is; it takes two to make a baby, and when a man and woman choose to engage in unprotected relations, they both should be prepared for the consequences. When you get a child, it doesn’t matter whether you are ready or not, children are innocent and they do not ask to be born, and thus do not deserve to suffer. So men, man up and stop making excuses.