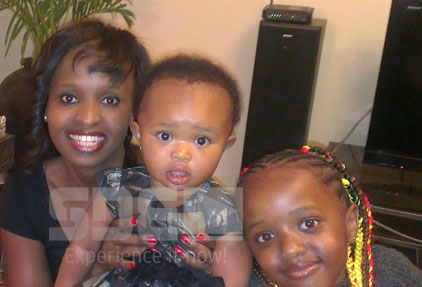 When Angela Ndambuki first met Debbie Asila in 1998 at Phoenix Theatre, and Angela Mwandanda a year later, she did not know the big plans fate had in store for them.

“When we met, we just clicked and got along so well. We immediately became best friends. We all had a love and passion for performing and I think that is what drew us together. Even after I joined University of Nairobi to study Law, we still continued to perform together. We acted in everything from Jack and the Beanstalk to Cinderella. We also did plays at the French Cultural Centre and British Council,” says Angela.

However, the girls never imagined that one day they would form one of Kenya’s most successful singing girl group to date. In fact, according to Angela, Tattuu was unplanned for, and formed by default.

“In 2002, apart from school and acting, we also used to dance for Nameless, but then he dissed us for new girls as we could not keep up with latest shaking booty styles. In the midst of our disappointment, one of my brothers gave us the idea to form our own music group and Tattuu was formed,” explains Angela.

Why the name Tattuu? “When picking our name we decided to go simple and local. We were three, hence tatu in Kiswahili. But we also wanted a twist and, hence the change of spelling to tattuu considering we had also been talking about getting tattoos. I am the only one who never got one to date.”

2003 turned out to be the big break for Tattuu as the girls had their first huge hit single.

“We released our first song Teso in 2003 after we had spent nine months working on it in the studio. It was a huge hit. We were so surprised, we did not expect it to blow up like it did,” continues Angela.

Other hit singles that followed thereafter from the trio include Haiya, Songea, Yu Wapi, Daima, Come Back to Me and most recently Yekeke.

After ten years with breaks in between to develop their individual careers and personal lives, Angela says they are currently working on their first album.

“The album will be a compilation of all our singles since 2003. We are celebrating ten years since our first release hit Teso,” says Angela

Also apart from singing Angela is also a writer.

“I wrote Teso, which was Tattuu’s first hit. Other songs I wrote include Haiya (Jua la Nyesha), Yu Wapi featuring AY from Tanzania, Daima, which I wrote with Shinde and Debbie, and Leta Wimbo for Coca Cola’s Pop star’s group — Sema. I enjoy writing jingles and have done a few. When I write, I am mostly inspired by my life experiences and other people’s experiences,” says Angela.

Lately, Angela has become a vocal entertainment voice thanks to her role as the Performers Rights Society of Kenya (Prisk) CEO.

“Prisk came into existence in 2008. The difference between Prisk and MCSK (Music Copyright Society of Kenya) is that it collect royalties on behalf of composers, authors, publishers and arrangers, while Prisk collects for performers,” explains Angela.

R-kay is the chairman of Prisk and the other directors include Nameless, Nonini, Iddi Achieng’, Ian Mbugua, Packson Ngugi, Debbie Asila and James Milulu.

“Originally, I was working at the Kenya National Commission of Human Rights. I have always had a passion for both intellectual property and human rights, and have been torn between the two areas of law.

When Prisk offered me a position, I left Kenya National Commission of Human Right. I wanted a job where I could be both a performer and a lawyer. My current job enables me to use both my creative skills as a performer, and analytical skills as a lawyer. I was the general manager from 2009 and only become the CEO eight months ago. My work since then has been to set up the society and keep it running,” says Angela.

What has been her contribution?

“I was part of the team that came up with the name and further saw Prisk registered as the first Collective Management Organisation (CMO) representing performers in Kenya and Africa. I also lobbied for the change in legislation for performers to strengthen performers’ rights and together with Marisella Ouma of the Kenya Copyright Board, made amendments to the Copyright Act to include various aspects of performers’ rights.

“Also to ensure effectiveness, I partnered with Kamp (Kenya Association of Music Producers) the CMO for producers, and have now set up offices in various counties and towns including Nairobi, Mombasa, Kilifi, Thika, Nyeri just to mention a few.”

On the home front, Angel married her sweetheart Roy Mutungi in 2011.

“We met in 2004 in Mombasa. He had come to watch divas night. He is a software guy and is very supportive of me. He is also a great dad to our two girls,” says Angela.

Angela says she is learning to be selfless, and the delicate art of balance work and home life.

“I am learning every day to become selfless and think about others more. My husband usually jokes that I have toned down the fire, so I guess I have become more relaxed and do not jump to fights as much,” says Angela.

“Tili our eldest daughter is seven. Keli my newest addition is now eight months,” she concludes.