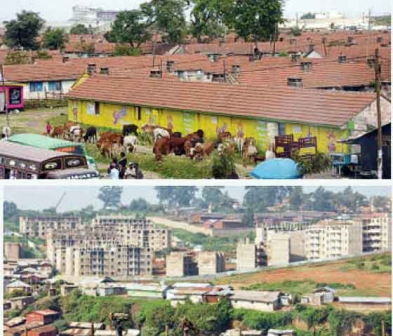 It is known for its endless bars frequented by loud, pot bellied men. J. Mwende says “I can’t help but associate bars with smelly toilets,” and adds that her greatest fear is getting married and bringing up her children in such an environment.

With it’s recent security crackdowns by the government to weed out terror cells in the area, no one wants to be woken up every midnight just to confirm that they are legally Kenyans. Zeinab Mwamburi lived in Eastleigh since childhood but had to move recently due to the terror attacks. “As a woman I found this place unsuitable for me. Living in fear not knowing when to start running was not the life I wanted,”Zeinab, who now lives in Langata, said.

The biggest threat to your security in these parts of Nairobi are gangs which include groups like Gaza Boys and other underage criminals who have a away of intimidating residents to a point they can’t even report to the police.

Agnes Munyaka, despite having lived in Kayole all her life says she still gets harassed by hostile gangs who are mostly made up of people she grew up with. “I wish I had a better source of income. I would move to a different neighborhood to avoid all this drama,” she said.

This area is famous for rape especially of minors resulting to unwanted pregnancies. It is simply not a safe place. There have also been incidents of motorists getting carjacked at night as they approach the slums.

In June last year, police shot dead a suspect in a botched robbery in Lunga Lunga slums. In the same area, a man was shot and wounded by suspected thugs.

There are two main gangs operating in the area. They are so dangerous that even authorities think thrice before setting foot in the area. The two gangs don’t see eye to eye so woe unto you if you are caught up in their fights.

Named after a war tone African nation, most people who live in the area are hardened residents who understand the ‘logistics.’

prosecuted for murder, residents protested for three days. They simply wanted him to continue killing the thugs.

However, it seems the thugs are stronger than cops.

The main problem in this estate is a high rate of unemployment that produces most hardened criminals in the city.

MDQ: Why I moved Blankets and Wine to Kasarani
Showbiz
By Boniface Mithika
2h ago
Why we put phones off when flying
Lifestyle
By Jayne Rose Gacheri
2h ago
Celebrities who have their body parts insured for millions
Showbiz
By Fay Ngina
3h ago
Man charged in Takeoff killing says he's innocent
News
By AP
8h ago
Man who shot Lady Gaga's dog walker gets 21 years in prison
News
By AP
8h ago
.