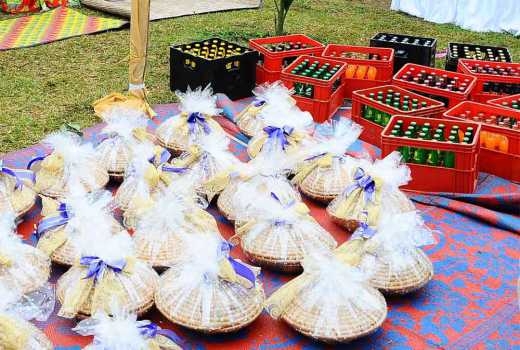 Kenyan men who shun weddings on grounds they are too expensive have clearly not been to Uganda.

Here, you will need a lorry full of bread before the priest can pronounce you husband and wife!

The bread is usually delivered during kwanjula, a ceremony, where the bride-to-be introduces her future husband to her parents and relatives.

And, be warned, the ceremony is not a cheap affair.

“The Baganda attach a lot of importance to such ceremonies which in Kenyan setting is known as pre-wedding. Should you skip the ceremony, you may as well forget about marrying from their culture. The bridegroom is supposed to buy loaves of bread (preferably a full canter truck), sugar, salt, soap, beans, maize, millet, sorghum, paraffin and cooking oil among other valuables,” Noah Mulongo, an elder, from Bumbo in Mbale Uganda told The Nairobian.

On this day, Mulongo reveals, the husband-to-be must visit one of the lady’s aunties, who acts as ssenga (intermediary).

“Ssenga is very central to the Kiganda marriage ceremony and performs respected role that many ageing Buganda women yearn to perform,” he said.

He said the ssenga, during this time of engagement and proposal to the bride’s family is not known to the rest of the family members.

“You are required to write a letter to the lady’s family (the bazeyi or elders). The letter has to be in flawless Luganda and has to be written through the ssenga (aunt who then becomes the official go between the two parties). Some people are good at writing these letters, so they are hired to do the job. They are mostly old men,” Mulongo said.

He said the letter is then taken to the ssenga accompanied with an envelope (money) to take to the bakulu bano (fellow elders).

“One of the items of the letter is asking to be allowed to get born in the in-laws family, by going there to ask for their daughter’s hand in marriage. It takes less than two weeks to get the reply,” he said.

Micah Sali, a Kenyan journalist who is engaged to Phillice Nekesa who hails from the Bukhayaki clan in Bumbo village, shares his experience with The Nairobian.

“We are working round-the-clock to ensure we buy all the things that were requested as bride price. Kwanjula is on the same day bride price is paid. We have bought all kinds of fruits and vegetables, cattle, goats and other valuables that are not easily found in Uganda,” he said, adding, “You also have to prepare money for the envelopes - for the father-in-law, mother-in-law, ssengas and brothers-in-law.  Another special envelope and a cock is presented to the official brother-in-law.”

Speaking to The Nairobian in Mbale, George Ssessimba, a 70-year old elder, said that during kwanjula, there is usually a battle between spokesmen.

“Spokesmen from both families will engage each other in cultural tongue-twisting in a question and answer challenge and display their knowledge of centuries old norms and traditions. It is the friendly battle of words between the two that makes the kwanjula and the whole ceremony memorable and unique.”

He explained that, “The rest of the ceremony is as interesting as the gifts which are left outside when the ceremony starts and are brought and allocated to the different beneficiaries. The hosts then make their demands known and give their blessings to the new family.