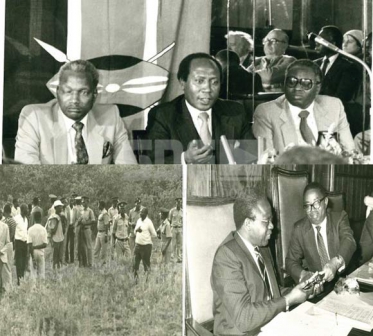 Around the time when Dr Robert Ouko went missing, veteran journalist and biographer Caleb Atemi, then a Kisumu-based reporter with the Daily Nation, remembers receiving a call from his boss, the seasoned editor Mutegi Njau.

“It was around 5pm. He asked me if I thought Ouko is alive,” recalls Atemi. “I told him that from what I had heard from the radio, I did not think so. Atemi was referring to a radio broadcast by the then president to anyone with information about Ouko’s whereabouts to notify the police.

Njau then instructed Atemi “to proceed to the minister’s home in Koru. It was now becoming apparent that the minister was not just missing. The family was hoping for the best as the country prepared for the worst,” he told Case Files. On February 13, 1990, the country’s attention was trained on the hills of Got Alila.

“It was a hilly place, the vegetation was dry and the hill ran into the Nyando River. When I got to the minister’s home, there were policemen all over. It was a search party mounted by several police officers. Quietly, I disappeared into the local community; it was during the oppressive Kanu days. You couldn’t report about anything unless the government official confirmed the same,” recalls Atemi, his hands running through his bald head.

“Even if you came across a dead body, unless the police said it was indeed a dead body, one couldn’t dare report so.” Atemi says minutes later, they stumbled upon the remains of a dead person. “It was still smouldering and there were police officers in every corner.

His limbs were broken and there was a thick layer of ash around his midriff. We sat there waiting for three people - Jason Kaviti, the Chief Government Pathologist; Hezekiah Oyugi, the Internal Security PS, and Police Commissioner Philip Kilonzo.”

Dr Ouko’s body lay in a thicket. Next to it was a diesel can, a pen, reading glasses, a walking stick, a flashlight, pistol and two bullets that were inside his jacket. The minister’s body was reduced to a pound of charcoal; his face was barely recognisable.

Here lay a Cabinet Minister, dead. Dr Robert Ouko was dead. His death came when the government was under immense pressure from a ragtag opposition and pressure groups to allow multiparty politics and dissent was met by detention, at times death.

“The country was on the edge, the regime had sat on so many people. Kenya was ready for pluralism, the first group of people on the streets were university students; first it was Nairobi, then Kenyatta (univeresities),” says Atemi who recalls signs of foul play since “the place was very dry and the body appeared to have been brought there and later set on fire. When I penned my story, I had to be smart about it, but the point had been driven home, after noting that the vegetation directly under the body of the minister was intact.”