Cholera is killing us, what if Ebola strikes again? 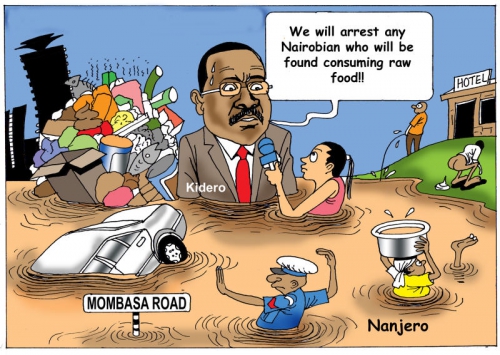 On May 9, Liberia was officially declared free from the worst-ever Ebola outbreak in human history, which killed 10,892 people and 26,298 infected mostly in Liberia, Guinea and Sierra Leone according to the World Health Organisation.

The first Ebola outbreak, which killed nearly 300 people, was in 1976 in the remote village of Yambuku, along Ebola River, Democratic Republic of Congo. Since then, the mere mention of the word ‘Ebola’ sends everyone into instant panic.

Researchers, on the basis of evidence and the nature of similar viruses, believe the virus is animal-borne and that bats are the most likely reservoir. The virus crosses over from its animal hosts into humans when people forage the forests for meat and consume infected animal flesh.

The virus is spread by coming into contact with infected blood or body fluids like urine, saliva, sweat, vomit, breast milk and semen. Objects like needles, syringes, infected fruit bats or primates also contribute to the spread of the virus. In the wake of the latest Ebola outbreak, Kenya, like a good sibling, did what she had to do. We sent volunteer health professionals to West Africa, draped in appropriate Ebola regalia.

Back at home, everything was spruced up at Kenyatta National Hospital. The government even set aside a whole section, rightfully, for would-be Ebola patients as the construction of an isolation unit commenced at breakneck speed. At the airport and all major border entry points, it was easier for the camel to enter through the eye of the needle than for anyone from West Africa to enter into Kenya legally. There were fliers on how to contain the virus that were dispatched to all health centres and public joints. Kenyans felt safe.

Months down the line, it is prudent to re-evaluate the situation as is now and pose the question; is Kenya really safe? After all that bravado to keep the virus away, could we have sank back to business as usual as we often do?

For starters, we really do not know the status of our volunteers who have since returned. Our hospitals are choking with other ‘serious’ emergencies – boda boda accident victims, flood and hunger victims, survivors of banditry attacks, not forgetting the  Al-Shabaab casualties.

The Ebola fliers now wrap mandazi and sweets. One prays surveillance at the airports is not back to the old lazy days when visitors handed in travel documents and quickly strolled past the barrier into Kenya.

With the virus surviving in semen for up to 90 days, we need not worry about the bats, but the ‘healthy’ human survivors. All the new infection cycle requires is an Ebola survivor deciding to have unprotected sex and we will have everyone running around like headless chicken.

Survivors of Ebola show a range of ‘post-Ebola symptoms’ including sight and hearing impairment, joint, muscle and chest pains, extreme fatigue and other complications. A person infected with Ebola is not contagious until symptoms appear, normally after two to 21 days.

With the recent Ebola scare in Düsseldorf, Germany, from a man who reportedly spent time in Guinea, we cannot afford to sit on our laurels. The fact that a cholera outbreak has been doing the rounds killing tens of people does not particularly inspire confidence.

The writer is a research scientist in the immunology of infectious tropical diseases at the Institute of Primate Research.