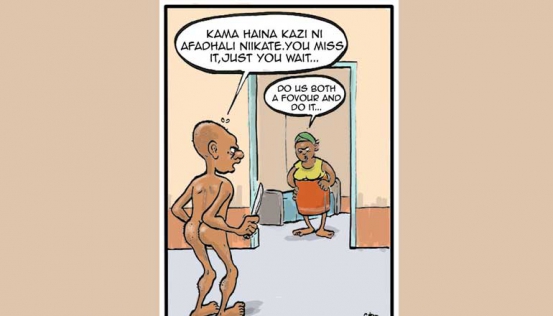 Just the same way no woman wants to be told she is as wide down there as a mtaro (water-torn gully), no man likes his manhood despised, however small it may be. So you can imagine the fury of a man at Emmuri village in Luanda constituency, Vihiga County after his wife dismissed his ‘dudu’ calling it small.

Locals are still reeling from shock following the odd incident in which Edwin Avedi, believed to be in his mid thirties, unsuccessfully tried to chop off his manhood in a bid to spite his wife after she despised it.

According to some of the neigbours Avedi talked to, it all began when he returned home to a sulking wife, after he had disappeared for three days. He is reported to have developed the habit of vanishing, switching off his phone and resurfacing days later and never wanting to be asked where he had been.

The trend is said to have annoyed his wife, only identified as Truphena, and is believed to have been partly why she began cheating on him. On this particular day, he returned and when she demanded to know where he had been, he dismissed her and refused to answer.

That night, when Avedi tried to touch his wife in attempt to initiate intimacy, she resisted. And when he insisted, she stormed out of the bed in a fit of self-righteous rage, yelling obscenities. She told him he has a small penis and he is also ‘useless in bed’ among other choice insults.

She denied him conjugal rights since then. With his ego bruised, the man turned hostile, and they have been fighting — both verbally and, at times, physically — at the slightest provocation.

“Their children have been telling us the couple quarrels all the time. He has told some of his friends how his wife has been denying him his conjugal rights. Most recently, he was overheard complaining that, if his wife continues denying him access to the cookie jar, he will cut off his manhood,” Ken Matikho, a neighbour familiar with the goings-on in the home, said.

On this night, the neighbour said the couple had a heated argument that degenerated into a scuffle. The man locked himself in one of the rooms where he, in a bid to express his anger in style, tried to chop off his manhood.

It was Matikho and other neigbours who took him to a mission hospital in Luanda town, turning him into a laughing stock in the village. The man underwent reconstructive surgery and is recovering. Locals expressed their disappointment, with some taunting and others defending him, albeit tongue in cheek.

“What would you do if you were the one?” one local quipped amid giggles. “You better chop off that thing to render it completely useless. What is the point of having it, yet your wife calls it useless and prefers other men,” joked another. The status of the marriage is not clearly known.