Drama as Nakuru sons disband amorous congress between mum, 55, and her 27-year-old lover 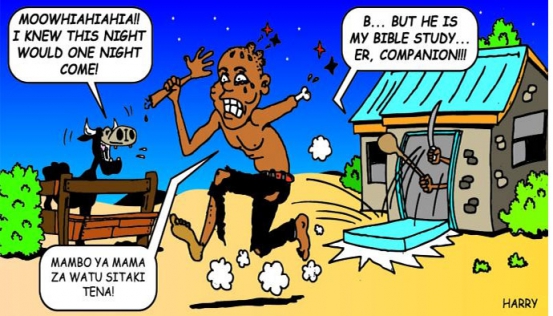 Just because love is said to be blind does not mean it is also stupid. That is at least according to two men in Kanyon area on the outskirts of Nakuru Town who could not stomach the fact that their 55-year-old mother was having an affair with a 27-year-old man.

Embarrassed by the odd state of affairs, they raided her house last Saturday evening and angrily disbanded what is suspected to have been an amorous congress between her and the young man. They beat up the young man for having what one of the sons called a “stupid relationship” with their mother, causing drama that has refused to leave the lips of locals.

The single mother of six had tried to cover her tracks by taking her second last and last born daughters, whom she lives with, to one of her grown-up children’s home to spend the night, claiming she was to attend a kesha (night church vigil).

She claimed she was to spend the whole night at the prayer meeting and did not want her two young children to get bored staying in the house by themselves.

However, this was later discovered to have been a trick, which she always used in order to invite the young stud to spend the night entertaining each other. Unfortunately for her, her two grown-up sons learnt of the ruse, leading to a dramatic end to her forty days.

A nosy neighbor who was familiar, embarrassed and uncomfortable with the odd relationship tipped one of the woman’s sons who teamed up with his other brother before laying the ambush.

“He (the tipster) told us he was finding it a bit embarrassing that the woman was carrying on with boy young enough to be her son, but had no way of spilling the beans to her sons, fearing backlash,” a neighbours told this writer. “On this particular day, he couldn’t take it anymore. He timed them and the moment lights went off, he called one of the woman’s sons and laid bare everything,” he said.

Upon arrival, the woman was reluctant to open the door. But the incessant knock became too much for her to ignore. Efforts to urge them that she was fast asleep and that they should visit her the following day bore no fruit. The two insisted to get into the house, much to her chagrin of their mother who was at pains to explain why she lied she was to be attending a kesha that night.

Despite denying the existence of a young man in the house, the sons ransacked her bedroom where they fished him out, hiding beneath the bed. Efforts to explain that he goes to the same church with the woman and had only visited her for a bible study session fell on deaf ears.

The woman tried to defend her young sweetheart, but her sons would hear none of it. The young stud found himself between the hammer and the anvil, with kicks and blows landing on him simultaneously. The two sons went at the young man hammer and tongs as they accused their mother of causing them embarrassment among their peers within the estate.

It took the intervention of neighbours who had been woken up by the commotion to storm the house and help end the fight. The offending young man is said to have bolted out of the house at top speed and melted in darkness without a trace.

Come the following morning, the drama became a talking point in the estate, leaving the woman and her family with nowhere to hide their faces. Because of the disgrace, the woman is rumoured to be planning to move houses to save face.