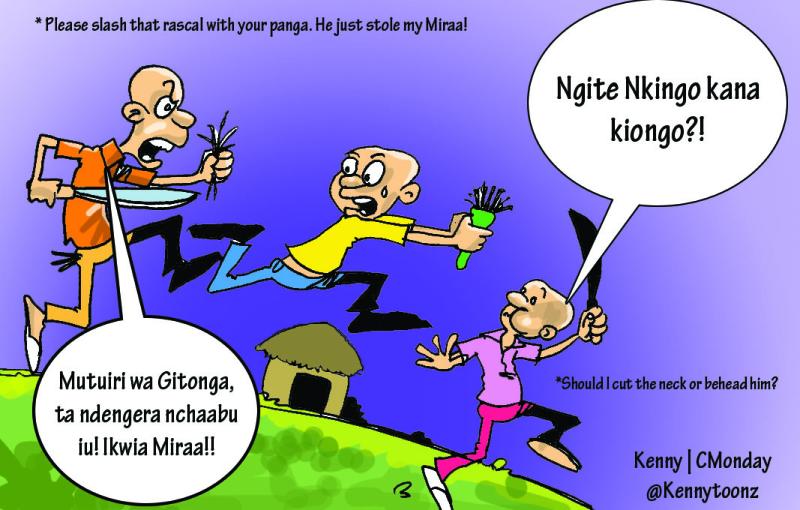 That the Ameru are legendary for their hot tempers, is not a myth. There are many graves and scars in the Green County that can attest to that fact.

It is a fact the Ameru, especially the menfolk, have a short fuse and once sparks begin to fly, bloodshed is inevitable. In fact, it is said you awaken the ire of a Meru man at your own peril because when push comes to shove, it often ends in violence, usually involving a machete.

A story is told of a man who was cutting grass for his cows by the roadside. Then two men came running down the road, one wielding a panga while chasing the other. “Cut that man for me,” the pursuer shouted at the man cutting grass. He obliged and chopped off the head of the escaping man.

When he appeared before a court later to face charges of murder, the accused told the judge he did not know why he killed the man.

He pointed in the general direction of the man who asked him to commit the offense and told the magistrate he was in a better position to answer the question.

And in yet another incident, a man walked into a hotel early one morning, placed a bag on the table and ordered for tea and mandazi.

He appeared engrossed in thought as he sipped from the cup and munched the mandazi. Minutes later, he did not notice his bag opening and a human head rolling out, to the horror of others inside the hotel.

The man retrieved a blood-stained panga from the bag but those present moved fast and pinned him down. When the police were called, he confessed he had beheaded two men he found trespassing on his Miraa firm.

“I was actually bringing the heads to the police station, but I stopped here to have breakfast,” he told police, adding that he had acted in self-defense, before he was handcuffed and marched to the station.

Igembe North, Igembe South and Igembe Central, all major miraa-growing areas, are hard hit by incidents of violence involving machetes, with men maiming or even killing each other.

It has become commonplace to come across residents sporting panga cut scars. It has also become very common to meet men walking in markets and by the roadside, with pangas in their hands.

Young and old men alike move around with pangas tucked in their back pockets. “It is for security purposes. There is a lot of insecurity so I have to be prepared, just in case I am attacked,” said John Muthuri, a miraa farmer. In any case, he adds, all the men have pangas, and it would be suicidal not to have one.

“What if a fight breaks out and I don’t have a panga?” he posed. In April 2013, a 25-year-old man hacked another to death for allegedly having an affair with his mother in Igembe North.

In June 2014, in the same county, it was reported that a man killed his assailant with a panga, and was left with serious injuries after they were involved in a fight over a woman.

Following the rising cases of panga violence, Igembe North OCPD Cornelius Sing’oei has issued a directive that anyone found with a panga will be arrested and charged with being in possession of a dangerous weapon. He says this is to stem the growing number of panga related incidents.

He says they will not allow people to walk with pangas, because the Ameru have shot tempers and do not hesitate to use them. “Their tempers are at a very high level. Some of them have to cut someone ‘to release the steam’. They cannot cool down unless they slash someone,” said Mr Singo’oei.

He says even small quarrels degenerate into panga fights. “They fight over the miraa crop, but some fights are alcohol-induced.” Sing’oei says Ameru men hold grudges for long.

He adds that from now on the police will arrest people on sight if they are found armed.