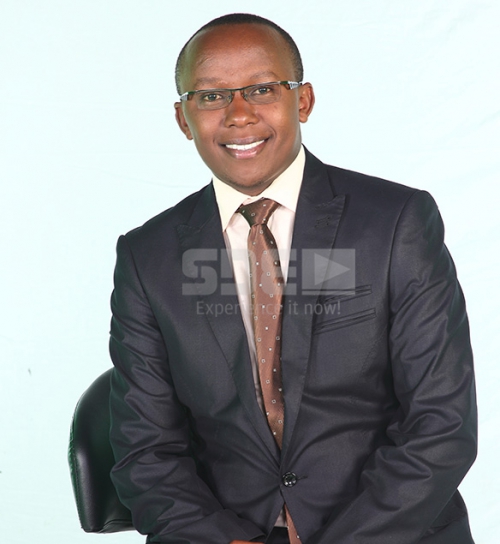 Quite the outspoken personality thanks to his weekly “Mock the Week” show on KTN, Wilson Mburu has become a household name. He is hardly ever scared to point the facts out. Together with Jeri, they scout the newsroom trying to find the juiciest news pieces.

Born in Lari constituency, Karatina, Wilson was the last born in a family of 3 children and this granted him exposure and social skills as learnt from his elder siblings. He attended Karatina and Pleasant Primary school where he sat his KCPE and passed to join Kiambu High School.

With an interest in computers and business, he joined the Nairobi institute of Business Studies, and at the request of one of his lecturers, decided to pursue a Diploma in Communications. It was here that he mastered his journalistic skills and which led him to the main broadcast company back in the day KBC, where he was a radio presenter for the Swahili service.

While at KBC, he received an offer to join the Family media as a camera man, but that did not stall him! He was out to learn as much as he could. During his work, seniors realized that his voice would be great for radio and gave him the news presenter’s position.

Soon after family media, he joined Easy fm as a morning breakfast news anchor, up until he got the chance to join the KTN family as a Prime time news anchor.

In regards to his job, Wilson affirms that he has the best job in the world because he loves what he does.

“Sometimes it can be tiring, but the passion keeps me going!”

Better yet, his show “Mock the week” has been growing in ratings and is set to become a 30 minute show starting the 26th June 2015.

“Politician have a bitter sweet relationship with my show because it is mostly about them. But the most important thing is that they watch,” he added.

Thanks to his boldness and assertive nature, Wilson has built his brands across platforms. It is for this reason he is our MCM today

Hit Pause: How to avoid game-related injuries
Arts And Culture
By Boniface Mithika
17h ago
A look at Maureen Waititu's beautiful home
Lifestyle
By Nailantei Kenga
20h ago
Ways women compromise health for beauty
Lifestyle
By Nancy Nzau
21h ago
Blending business with leisure at airport hotels
Lifestyle
By Peter Muiruri
21h ago
'24, 'Runaways' actor Annie Wersching has died at 45
News
By AP
22h ago
.