The Google doodle is today celebrating Prof Okoth Okombo who would have been 71 today.

Google Arts and Culture states that Okombo founded the Kenyan Sign Language Research Project at the University of Nairobi.

He published more than 30 scientific publications on the structure, vocabulary, and sociological properties of the language of deaf Kenyans. 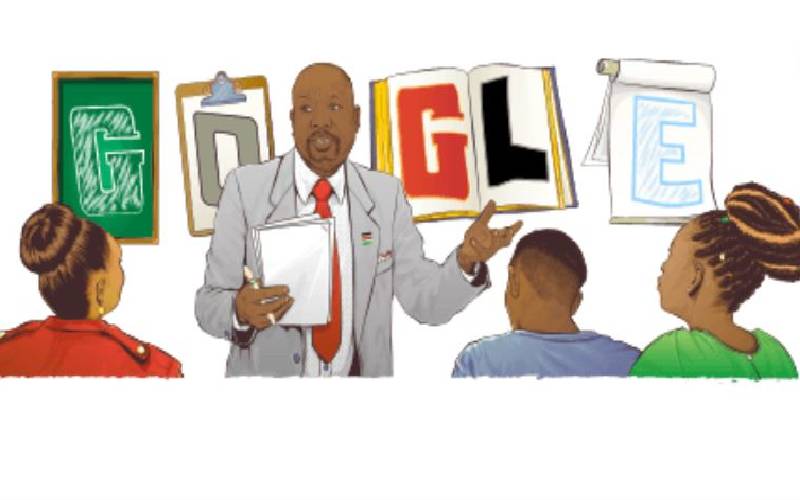 As a result, Kenyan Sign Language (KSL) was implemented in schools, hospitals, courtrooms, churches, and the media.

Prof Okombo died on the night of Wednesday, November 1, 2017.

Some of his works include A functional grammar of Dholuo, Reflections on Theories and Methods in Oral Literature and The Suba of Kenya: A case of growing ethnicity with receding language competence.

Google Arts and Culture adds that as a member of the Omusuba tribe raised during a time of British colonial rule, Okombo witnessed firsthand how the elevation of the English language eroded his ethnic identity by pushing his mother tongue of Olusuba to near extinction.

He was inspired to have a lifelong mission to preserve indigenous African heritage.

He caught an interest in languages at an early age and wanted to pursue a career as a teacher.

He worked with the university to his death in 2017, and was the youngest Professor to present its inaugural lecture.

While pursuing his linguistics doctorate in 1983, Okombo published Masira ki Ndaki (“Misfortune is Inevitable”) in Dholuo, which is considered one of the first novels published in a Kenyan language.

Dr. James Oranga, who teaches Journalism at the University of Nairobi, on November 17, 2017, said Prof Okombo’s departure left an intellectual vacuum that will be challenging to fill.

“Like some other great men who have gone before him, his story emphasises the greatness of education. With education, all of us can conquer our obstacles at birth,” he said.

Premium How Kenya Kwanza is exposing itself to attacks by opposition
Opinion
By Gordon Opiyo
21 mins ago
Premium Governor Kawira Mwangaza sees political light
Central
By Phares Mutembei
21 mins ago
Zambian killed in Ukraine was employed as Russian mercenary
Africa
By AP
21 mins ago
Premium When a British soldier was hanged for killing his cook
National
By Amos Kareithi
21 mins ago
.