By Washington Onyango | 4mos ago 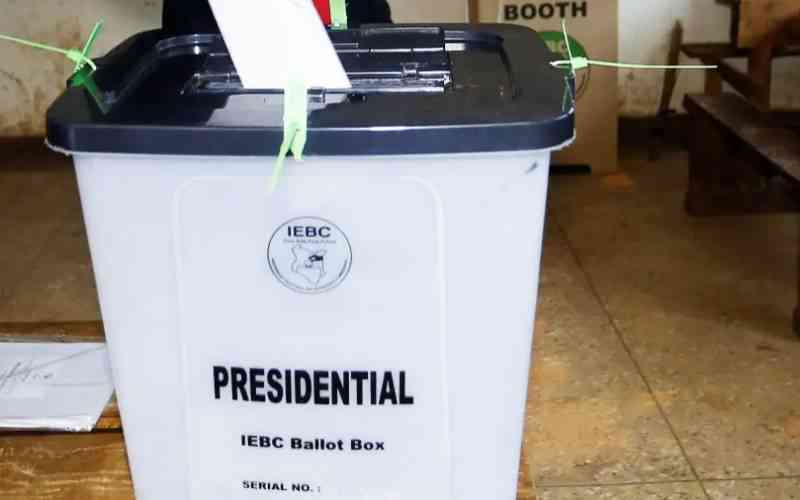 The altercation between the Independent Electoral and Boundaries Commission chairman Wafula Chebukati and the National Police Service just 15 days to the General Election, should concern all Kenyans.

The tiff emanated from the arrest of a Venezuelan national at the Jomo Kenyatta International Airport on Thursday, who was in possession of stickers belonging to the IEBC, which according to the police had not been declared to allow them provide requisite security and escort as per laid down protocols.

Since then, it has been a back and forth exchange, which rather than resolve the issue, has sparked conspiracy theories among the rival politicians and ordinary Kenyans. This can lead to a possible rejection of the credibility of the August 9 presidential election results. According to the IEBC boss, the Venezuelan national was also in possession of laptops, flash disks and mobile phones containing sensitive information relating to the forthcoming election.

He said the traveller, alongside two other colleagues, also employees of Smartmatic International BV, who had gone to receive him, were forced to give out passwords to the gadgets and had not all been cleared nor the material delivered to IEBC contrary to information earlier shared by Police Spokesman Bruno Shioso.

Chebukati alleged that they were required to reported to the OCS, Anti-Terrorism Police Unit on Tuesday, an office DCI Director George Kinoti says does not exist in their structure.

Amid the hullabaloo, the main question is why the IEBC entrusted delivery of critical materials to a single individual and in an opaque manner, exposing the adventure to many risks, including loss of the luggage in the chaos that often accompany air travellers.

And why would such strategic materials be imported at this late stage when one would have expected them to have been tested and further configured in readiness for the elections?

This would be quite unfortunate as it echoes events of the 2017 elections when failure of technology deployed to manage the presidential polls, led to a dispute that led to violence and annulment of the results by the Supreme Court. Were any lessons learnt?

While the IEBC continues to assure Kenyans of its commitment to deliver credible, free and fair elections, it can do better than this.

On the other hand, the police should be sensitive to dangers its actions regarding the elections could pose to holding of a secure, incident-free electoral process.

In the past, the service has been accused of siding with the government to suppress opposition to flawed elections. What is unique in this year’s election is that voters have largely exercised restraint without resorting to violence and threats during the campaigns and one hopes it will continue into the post-election period. We must never take this for granted.

Premium Governor Kawira Mwangaza sees political light
Central
By Phares Mutembei
20 mins ago
Here are the PMVA nominees 2022
Showbiz
By Fay Ngina
47 mins ago
Don't roll back progress in war against HIVAids
Editorial
By Editorial
1 hr ago
Premium How Kenya Kwanza is exposing itself to attacks by opposition
Opinion
By Gordon Opiyo
1 hr ago
.