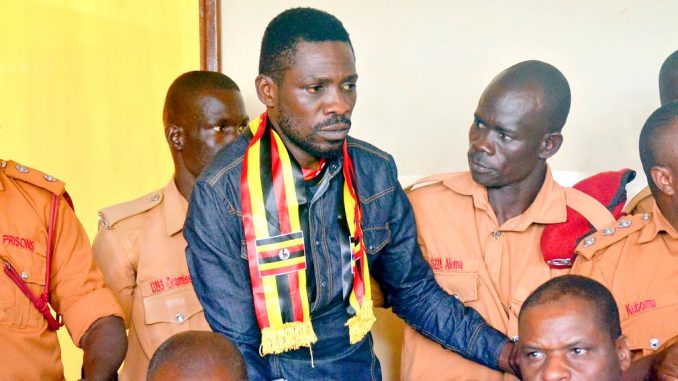 When Robert Kyagulanyi took on the stage name Bobi Wine, it probably was not in honour of the Ugandan alcoholic beverage Waragi. Nor could he have foreseen that his name would become synonymous with Uganda’s struggles for both renewal of leadership and generational change. Mr Wine is a musician-turned politician. He is a maverick who has defied the odds to occupy the national psyche of Uganda and the attention of the world.

Bobi first burst into the political limelight as a Member of Parliament after winning the Kyadondo East by-election in June 2017. Thereafter, he supported candidates to resounding victories in Bugiri and Arua municipalities. These were up against candidates coalescing around President Yoweri Museveni and Opposition leader Kizza Besigye.

To many Ugandans, President Museveni appears to be light-headed with power. The ideals of the revolution that he espoused do not appear to be manifest. In an old video clip doing the rounds, he denounces African leaders that cling to power.

But today, term limits have been removed from the presidency, in effect making him president for life. Bobi Wine’s victory, and that of the colleagues he supported threatens to burst the president’s bubble. For the first time, a more potent and youthful brew, with more credibility than Opposition chief Besigye, threatens his reign.

That these wins have rattled politicians of the president’s vintage is evident. They appear to have shifted the political landscape. The old order of war veterans no longer seems to hold sway over an increasingly youthful electorate. The young have no conscious memory of Uganda’s turbulent past. They do not recall the gory days of the tyrant Idi Amin nor the repression of the Milton Obote regime.

None of the confusion preceding President Yoweri Museveni’s long reign comes to mind. For a good number, Museveni is the only president they have ever known. And they are not beholden to him. They have none of the reverence that their parents have for him as the restorer of peace and good order after years of civil war. Further, the traditional African deference to age and authority is slowly ebbing away.

This wind of change sweeping through Uganda is not unique. Indeed, there is talk of an East Africa Spring perhaps precipitated by Kenya’s multi-party politics and leadership renewal. Kenya has a great degree of social and political freedom and a comparatively youthful leadership across every facet of representation - from Members of the County Assembly all the way to the presidency.

Tanzania finds herself in unchartered waters with regards to opposition leaders’ complaints of government’s intolerance of dissident views. Even Ethiopia’s strongmen have ceded ground to a young and progressive prime minister who has not only made peace with the perennial warring neighbour Eritrea but has also ensured that the land-locked country has yet another access to the sea through the Eritrean port city of Assab.

Bobi Wine was arrested recently, ostensibly on charges of treason. According to his supporters, the real reason for his detention is that he has repeatedly argued for institutionalised leadership where the power is not centred around an individual. Ugandans reacted to his arrest by taking to the streets to agitate for his release.

International sympathy has added to the intoxicating effects of mass action. Sustained headlines have made Mr Wine the new “flavour of the month".

What Kenya can learn from these events is that total emancipation; that is, political, social and economic freedom, is a prerequisite for national stability. The nation’s current leadership has presided over the most tumultuous economic times of its history.

For the first time in 55 years, her biggest trading partner, Uganda, has exported more to Kenya for three months continuously. This economic downturn, if not contained, could create despondency and a restive country. Second, youths now form the bulk of the electorate. They are issue-driven millennials, no longer content to be railroaded into unenlightened political choices by ethnic jingoists.

It is unlikely that Museveni will acquire a taste for Bobi’s new brand of revolutionary wine. He is thick-skinned and has imbibed the unfettered powers of the old order.  He may decide to weather the storm. But Ugandan youths have drunk from Bobi’s chalice and the allure of change may be irresistible.

While it is still too early to gauge its efficacy, the heady effects of the Bobi Wine revolution will not be dissipating any time soon.

Public hospitals in counties risk shutting down over debt

Both Kenya Medical Supplies Authority and Kenya power have issued warnings to the counties over debts running to billions of shillings.

Register as voter or hold your peace for five years
;
Feedback